US government awards a Kenyan for fighting terror in Garissa 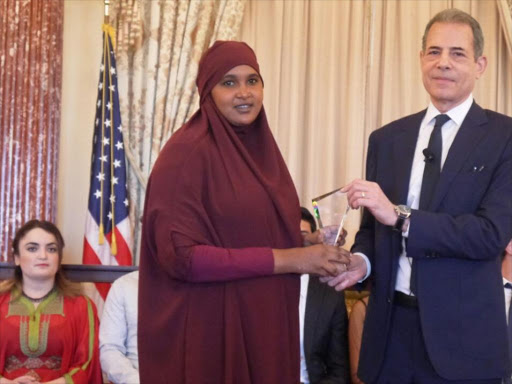 The US government has awarded a Kenyan for fighting terrorism in Garisaa county.

Asha Hassan, 24, received the award of Emerging Young Leaders award 2016 on Thursday at the US department of state in Washington DC.

Asha was among ten participants across the world who won the prestigious award at the ceremony.

The awards were presented by Under Secretary of state for public affairs diplomacy and public affairs Richard Stengel who praised Asha for her courageous acts of trying to fight terror in Kenya by involving her mates.

“ Asha developed a youth-led unit spearheading dialogue and reconciliation among ethnic clans for Garrisa. With the passion to mobilize Somali girls to be change agents in war on terror. We commend her for her outstanding role,"said Stengel.

“This new initiative identifies young leaders around the world who are making positive changes in challenges environment and it's my pleasure to recognize this group of Exceptional young people.”

Speaking to The Star in Washington, Asha said she assisted her younger brother Abdi Hassan not to join the Al Shabab group but later learnt of the wrongs of the group and decided to help people reform and fight terror.

“I discouraged my brother join the Al Shabaab after dropping out of school in class six an this is when I learnt the wrongs of the group and decided to dedicate my time to fighting terror,” she said.

Kenya Deputy Chief of Mission in the US David Gacheru said they are collaborating with with US in counter-terrorism through programs including violent extremism projects in US and in the country.

“We hope our collaboration with the US government will soon help solve terror related problems our country is facing,” he said.