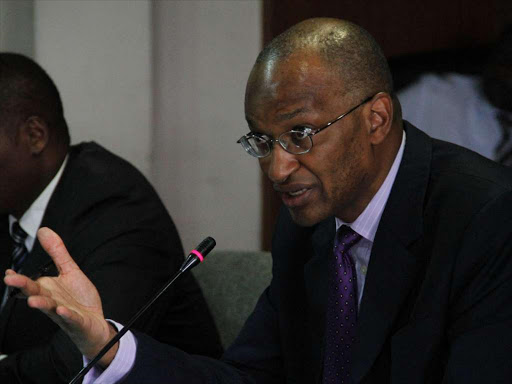 CBK governor Patrick Njoroge when he appeared before Finance Committee of the National Assembly on April 21. /MONICAH MWANGI

The CBK Governor wants MPs to change the law to have fraudulent bank managers jailed for not less than 20 years. Patrick Njoroge, yesterday told the Committee on Finance, Planning and Trade individuals who mismanaged Chase Bank and National Bank of Kenya will be prosecuted.

He said his team is already drafting changes to the Central Bank of Kenya Act to tame rogue banking institutions, as well as raise the bar on penalties to net criminals.

“We are preparing the proposals and they will be coming to you soon. We have to hold people accountable, we will make the penalties stiffer than before,” Njoroge told the legislators.

Committee chairman and Ainamoi MP Benjamin Langat said the lawmakers are ready to amend the law and make tougher penalties for such crimes. But nominated MP Oburu Oginga accused the CBK chief of running the institution single-handedly, after he admitted there is no board and only the board chairman was appointed.

“The CBK governor and board chair are on a mission. There must be a board to run the institution and not two individuals,” Kitutu Masaba MP Timothy Bosire said. “As for now you and the chairman are senior, and junior employees will be forced to take orders from you. It is unacceptable,” Oburu said. MPs also put the governor to task on why the managers of Chase Bank, National Bank and Imperial Bank are not in jail and why their probe has staggered.

Kisumu woman representative Rose Nyamunga said recovering the lost money is too lenient. She said they must face the full force of the law. “What is the deterrent thing you will do to these directors? It is not enough for them to return the money. People have already suffered in this process,” Nyamunga said.

Audit firms to be de-listed

CBK governor Patrick Njoroge also told MPs audit firms that presented misleading reports on the stability of the financial institutions under receivership, will be de-listed and will not be allowed to conduct audits of other financial accounts. The CBK governor said the bank managers will not be spared and that they are following paper trails to find out if there was collusion between CBK officers and the banks.

“We have the evidence and we will put it forward. We are working with investigative arms of government,” Njoroge said.