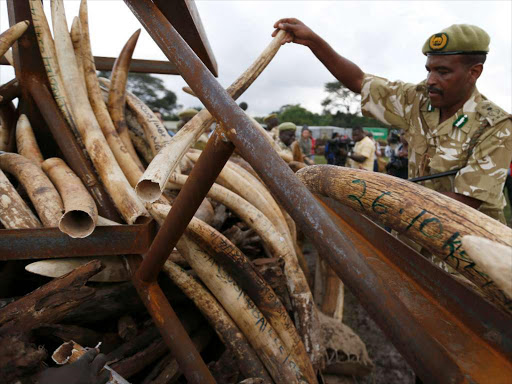 Burning ivory will ensure it has no economic value, the government said yesterday.

Kenya Wildlife Service director general Kitili Mbathi said: “Kenya has decided to burn ivory because the moment you burn it, you are making it beyond economic use.Trophy disposal is left for countries to decide, some opt to crush it.”

Ten tonnes of firewood and more than 10,000 litres of fuel will be used to burn the ivory. South Africa, Botswana, and Zimbabwe are opposed to the destruction of illegal ivory. The three made a profit from their stockpiles in 2008 when Convention on International Trade in Endangered Species of Wild Fauna and Flora approved a one-time ivory sale to China and Japan.

Conservationists see the move as a future endorsement of ivory trade. Tourism CS Najib Balala said elephant and rhino horns only have value when on a living animal.

“The burning is major statement that we cannot kill wildlife and benefit. We want them alive as they help bring tourists to our country. Our heritage must be protected,” he said on Wednesday.

Colobus monkey and leopard skin, sandalwood as well as sacks full of Prunus Africana barks, a medicinal tree, are also set to be torched.

Balala urged neighbouring countries to follow suit and destroy ivory they are holding saying such a move will help increase wildlife.

KWS said it did not build rhino horn piles until the burning day as they can easily be stolen. In 2013, Kenya lost 302 elephants and 59 rhinos while in 2014, 164 elephants were killed as well as 35 rhinos.

Last year, 96 elephants were killed as well as 11 rhinos.

Tusks weighing 65kg that belonged to Ahmed, an emblematic elephant known to many during the 1960s and 1970s will not be burned.