Textalyzer to be used to arrest drivers using phones while driving 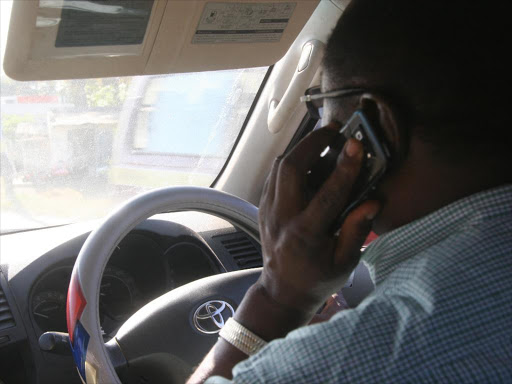 A motorist uses his mobile phone while driving. Photo/ELKANA JACOB

New York police will soon use the 'textalyzer' technology to check if drivers involved in crashes were distracted by their mobile phones.

With the technology, drivers involved in accidents will have their phones tested by police using a "textalyzer".

Officers will be able to see when a motorist used a phone but not an individual's conversation, phone numbers, pictures or any information on the device.

The adopter of the technology,

, said it was developed to try and protect drivers from accidents and prevent the number of accidents caused by mobile phone distractions.

The technology is being developed by Israeli security company Cellebrite.

Using a mobile phone to text, emailing and chatting while driving has led to many accidents in Kenya over the years.

If adopted to the country, the technology could be added to NTSA's efforts to reduce the number of road crashes. Officials from the authority could not be reached for comment.

from a Kenyan dealer of French auto-maker, Peugeot, to boost surveillance capabilities.

said the cars will help it carry out its mandate of controlling public service vehicles, patrolling and enforcing traffic rules.

In 2015, NTSA launched a safety campaign in 2015 to reduce road accident deaths by a third in the next two years.

The campaign dubbed "Save 1,000 Lives" was to mobilize the private sector to support road safety initiatives.

said the number of across the country between January and March rose to 827 from 725 in the same period last year.

In March, the National Transport and Safety Authority said the

number of pedestrians killed was highest at 326, followed by passengers at 176 and cyclists at 139.

The total number of crash victims who sustained serious and slight injuries from January to March was 3,105, compared to 1,974 in 2015.

The NTSA said in January that

, pedestrians and motorists reporting 60 per cent of the fatalities in 2015.