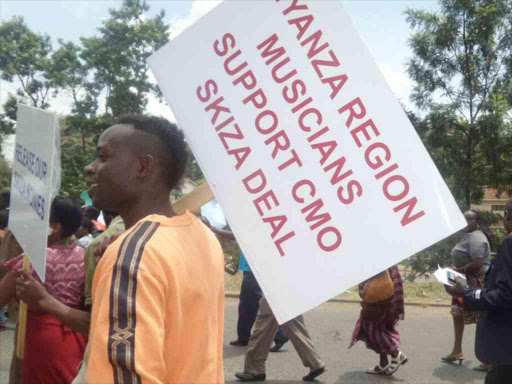 Officials of the Music Copyright Society of Kenya lead artistes in a demonstration in Westlands, Nairobi, for Safaricom to release money owed to them in form of Skiza tunes royalties, April 13, 2016. Photo/ELLY GITAU

MCSK led artistes in a peaceful demonstration on Wednesday for Safaricom to release money owed to them in form of Skiza tunes royalties.

Officials led the artistes in a street march in Nairobi from MCSK's head office in Westlands to Safaricom's along Waiyaki Way. The demo resulted in a traffic snarl-up.

delivered a petition to the telecommunications giant, demanding the immediate release of the monies.

A court put the Skiza tunes royalties payments on hold in July 2015. This was after a group of artistes filed a case to stop the implementation of a signed pact between Safaricom and three collective management organisations.

The three were the Music Copyright Society of Kenya,

Performers' Rights Society of Kenya and the Kenya Association of Music Producers.

The agreement would have seen the Skiza money remitted directly to the CMOs omitting the third parties who, in this case, are Premium Rate Service Providers.

But the court ordered Safaricom to stop any Skiza payments until the case is heard and fully determined.

Stephen Chege, Safaricom director of corporate affairs, told the The Star in an interview today that the company was only acting on court orders.

Chege said the company had no intentions of holding on to the Sh152 million sum.

He said the company brought all concerned parties together in a January, in a

series of meetings that took seven days, to chart the way forward in while awaiting the court determination.

"The parties consented to have some of the money paid out to CMOs and premium rate service providers. This would not have interfered in any way with the progress of the matter already in court," Chege said.

"But just when we were about to make the payments as agreed, we received another injunction from a court in Malindi, barring us from doing so."

Safaricom had to immediately comply with the order, he said, noting the company's interest is in growing the platform, not keeping the money.

The High Court is expected to make a ruling on the matter on Friday.