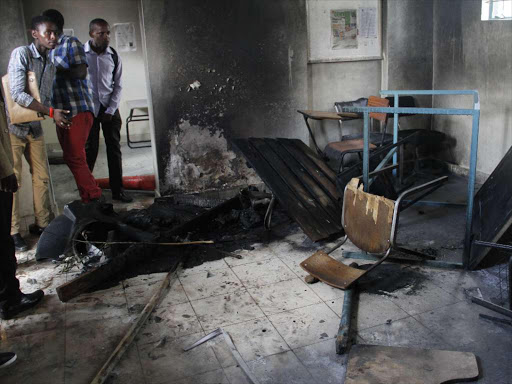 UON students inside SONU office which was torched by a group of students protesting the reelection of Babu Owino as the new chairman on April 5. The University Senate has proposed tough laws tocurb such occurencesPhoto/Monicah Mwangi

A group of University of Nairobi students yesterday set the union's office on fire in protest against the re-election of long-serving Sonu chairman Paul Ongili, popularly known as Babu Owino.

The students engaged anti-riot police in running battles on the streets.

During the Saturday election, Owino reportedly got 18,000 votes against his closest challenger Mike Jacobs, who got 2,000 votes.

Students say there was massive rigging.

Owino was the chairman of the Students' Organisation of Nairobi University in 2011, 2014 and last year.

The case will be heard on June 2.

Students who had planned to barricade University Way and Uhuru Highway engaged General Service Unit inside the varsity's compound.

"We are holding this demo, not just to protest Babu's re-election, but to also protest against the violation of our rights.

GSU officers harassed us on Saturday night. They violated our rights," a student said.

"We cannot allow this university to continue being mismanaged by Owino and his insiders. Students pay Sh500 to the union every semester. Sh100 is used to bribe them and the Sh400 is spent on prostitutes in Westlands and buying flashy cars. It's time we put that to an end," a student said.

Owino was sworn in on Saturday for a one-year term.

"It cannot be that Owino won. Even if you walk around campus asking who voted for Babu Owino, no one will say they voted for him," another student said.

One student appeared before Kibera law courts to answer to charges of being in possession of a panga during the elections.

Police allegedly found a panga in Elvis Ogola's car. He was a presiding officer.

Ogola denied the charge before senior resident magistrate Shadrack Mwinzi and asked the court to release his car which is in police custody.

Post a comment
WATCH: The latest videos from the Star
by JOSEPH NDUNDA, @MuthuiNdunda
News
05 April 2016 - 05:00
Read The E-Paper