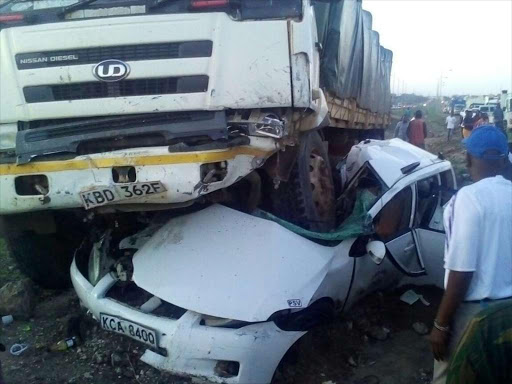 The National Transport and Safety Authority has reported that the number of people killed across the country between January and March has risen to 827 from 725 in the same period last year. Photo/FILE

The number of people killed across the country between January and March has risen to 827 from 725 in the same period last year, the NTSA has reported.

The National Transport and Safety Authority said this on Tuesday, noting this translated into a 14.1

per cent rise in road fatalities.

The number of pedestrians killed was highest at 326, followed by passengers at 176 and cyclists at 139.

The total number of crash victims who sustained serious and slight injuries from January to March was 3,105, compared to 1,974 in 2015.

The NTSA said in January that

, pedestrians and motorists reporting 60 per cent of the fatalities in 2015.

Director general Francis Meja attributed this to increase in the number of vehicles and motorcycles imported every month.

He noted that most accidents reported involved private cars illegally operating in the public transport system.

Last year between January and September,

The NTSA said fatalities from road accidents were 2.9 per cent more than in 2014, with Nairobi county accounting for about 50 per cent of them.

The government from a Kenyan dealer of French auto-maker, Peugeot, to boost surveillance capabilities.

Meja said the cars will help the NTSA carry out its mandate of controlling public service vehicles, patrolling and enforcing traffic rules.