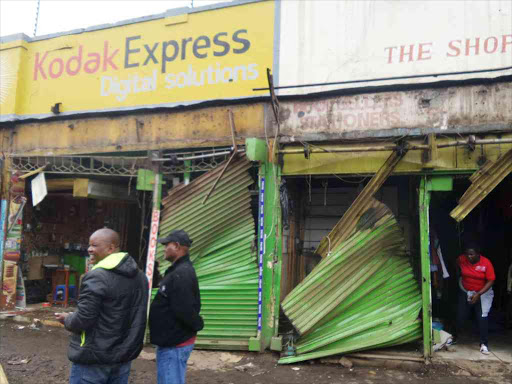 Some of the stalls that were looted

Mr. Mustan arrived at the premises at 3.30am armed with stones and machetes accompanied by a bulldozer.

"They started hurling stones at the security officers outside the premises before they started breaking and looting the stalls," Kimani said.

He said the traders operating stalls in the Shopping Paradise opposite Turkey's Supermarket had been subjected a loss of property worth 100 million shillings.

Kimani said for two years there has been an ongoing court case between the owner of the building Mr. Abdul Manaf with the tenants.

'Manaf wanted us to immediately vacate the building but we obtained a court order to maintain the status quo until the case is heard and determined, he said.

According to Kimani, the landlord had agreed to the terms of the order but to their surprise, he hired goons behind their backs to loot their property.

Florence Anyango who owns three stalls within the building said she had invested over five million in her business.

"I took a micro-finance loan to run this business and so far I have not even paid half of it, where do i start?. This is really inhumane to disrupt other people's source of income," she lamented.

The traders, however, vowed not to vacate the premise until they are fully compensated.

Kamukunji OCS Abdi Affey said they had not received any information about the looting and he could not comment on a matter unknown to them.

"I can not even remember if they presented a copy of the court order, for now am busy in a meeting," Affey