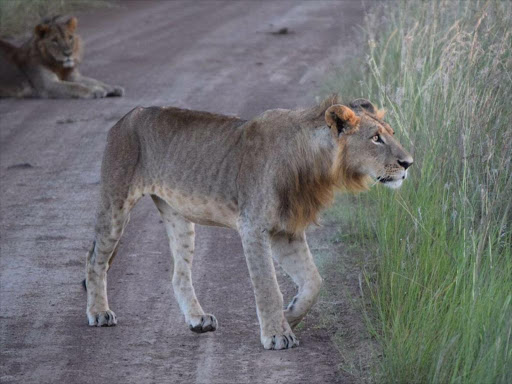 The lion named 'Lemek' that was found dead in Kitengela, March 31, 2016. Photo/COURTESY

Another of Kenya's celebrity lions called 'Lemek' died on Thursday,

a day after one was gunned down in Isinya after injuring a man.

Two lions strayed out of Nairobi National Park and were

, prompting air and ground searches by the Kenya Wildlife Service.

the carcass of a

two-and-a-half-year-old male lion was found in the area.

He said in a statement in the evening that

there were no indications of who may have killed the animal.

Members of the public had reportedly threatened to kill the lions.

Udoto stated the KWS and the Kajiado county commissioner’s office will convene a community meeting on next Tuesday to mitigate human-wildlife conflict.

“We will have a meeting with all stakeholders to end the hostility between our animals and locals," he said.

He added that anyone found responsible for killing wild animals will be prosecuted.

The lion that died in Isinya was

called Mohawk. He was

after being cornered by KWS rangers at 9am on Wednesday.

The animal believed to have wandered out of Nairobi National Park on Tuesday night was seen in Isinya Plains near County Resort, some 15km south of the park.

KWS officials said it was killed to prevent more injuries as the situation was "beyond salvation".