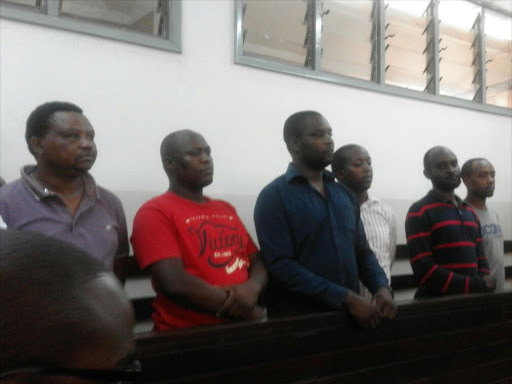 The six taxi drivers who were charged with attempted murder and malicious damage of a vehicle, in connection to the torching of Uber taxis, at Kibera law courts, March 29, 2016. Photo/ANNETTE WAMBULWA

Six taxi drivers have denied charges of attempted murder and malicious damage of a vehicle in connection to the torching of Uber taxis.

The prosecution opposed their release on bail saying they had to be taken through an identification parade.

Senior principal magistrate Bernard Ochoi remanded them to Kilimani police station until Friday when the case will be mentioned.

The six were arrested after an Uber taxi driver was attacked last Tuesday on Naivasha Road in Kawangware, Nairobi.

Driver Hesbon Pachiti, who was alone, was

while heading to the city centre at 9pm,

after dropping a passenger in Riruta. He

The incident came barely a month after

was razed by a group of suspected taxi drivers in Kilimani.

has announced a major

Regular taxi drivers are disgruntled over Uber’s cheap pricing model, which they argue is hurting business, and have been plotting to push the competition out of the city.

Post a comment
WATCH: The latest videos from the Star
by ANNETTE WAMBULWA AND NANCY AGUTU
News
29 March 2016 - 15:00
Read The E-Paper