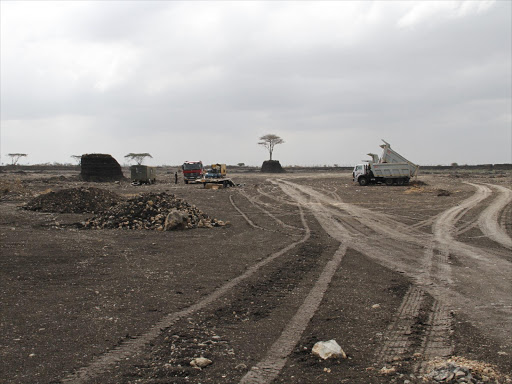 A file photo of construction equipment at the site of the Sh56 billion Greenfield Terminal project at the Jomo Kenyatta International Airport, July 21, 2014. Photo/CHARLES KIMANI

KAA has terminated the ambitious Sh56 billion Greenfield Terminal project at the JKIA, ending Kenya’s dream of having the largest terminal in the continent.

The decision was based on prevailing operational, economic and financial dynamics which have been on a downward trend over the last three years, the authority said on Tuesday. The project was to be completed by next year.

“The Kenya Airports Authority wishes to inform members of the public that the JKIA Greenfield Terminal project has been terminated with immediate effect by the authority,” acting managing director Yatich Kangugo said in a statement.

The board which held an unusual sitting on Monday evening (a public holiday) had already stopped payments to Anhui Construction Company, according to a source.

The company is said to have withdrawn $4 million (Sh405.9 million) from KAA before the project took off, after it moved to site on September 14, 2013.

President Uhuru Kenyatta launched the project on November 13, 2013. The terminal was to be the largest in Africa; the closest airport terminal in the region,

in terms of capacity, is South Africa's OR Tambo's central terminal, with a capacity of 12 million passengers.

The SA terminal is followed by Egypt's Cairo airport terminal three with a capacity of 11 million and Sham-el Sheikh, also in Egypt, with 7.5 million.

Kangugo said the ongoing reorganisation and modernisation of the Jomo Kenyatta International Airport has expanded capacity at the new Terminal 2 by 2.5 million passengers.

He said the soon-to-be-opened Terminal 1A will also increase capacity by an additional 2.5 million passengers.

“When this is added to the original capacity of JKIA's 2.5 million passengers, the total installed capacity rises to 7.5 million in 2016 against an actual passenger number of 6.5 million, leaving an excess capacity of one million,” Kangugo said.

“It is envisaged that by the time the modernisation of Terminal 1B, C and D is done , the total handling capacity will increase to a peak of 10.5 million passengers per annum."

The authority said it remains confident that the ongoing modernisation and expansion of the JKIA hub is adequate to positioning the airport as the aviation gateway for the region.

The country, Kangungo added, is on course to achieving Category one status by May as the target date for commencement of direct flights to the US.

The project, which was mooted under the Grand Coalition Government as part of flagship Vision 2030 projects, was approved by the KAA board, the Cabinet, Parliament, public procurement authorities and the Ethics and Anti-Corruption Commission.

The Greenfield Terminal project had been designed to encompass construction of a four-level terminal building comprising a central processing area, a transit hotel, landside retail centers, arrivals and departures plaza.