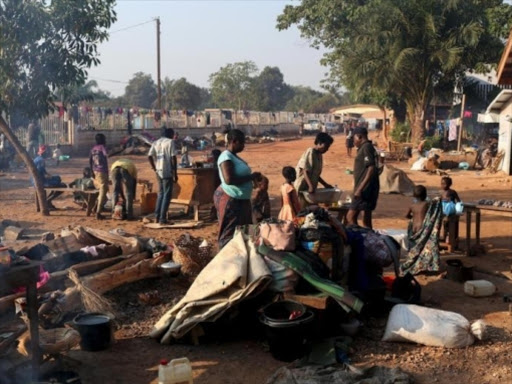 People in a camp for internally displaced persons on the grounds of the Saint Sauveur church in the capital Bangui, Central African Republic, November 25, 2015. Photo/REUTERS

One in four internally displaced persons surveyed in

has been a victim or witness of human trafficking, the majority lured to the Middle East but then forced to do menial work or sexually exploited, an anti-trafficking charity said on Tuesday.

People who were displaced during

Kenya's 2007/8 post-election violence were most at risk, the charity's researchers found, particularly those who live close to a major highway or local trading centre.

"As traffickers tend to look for people who are desperate and with an uncertain future, they often target IDP communities," HAART, a

"They give false promises such as non-existent opportunities for jobs or education."

Traffickers posed as job agents in 88 per cent of cases, researchers found, and two-thirds of their victims were women.

"We have a group of people who were taken to Saudi Arabia under the false pretext that they were going to be employed," one respondent told the researchers.

"Some were being sexually harassed; for others, the jobs that they were made to do were not what they expected."

Sexual exploitation was the second most common result of the trafficking, affecting 25 per cent of those trafficked.

HAART surveyed 309 IDPs in 13 places across

Researchers found that half those displaced by the post-election violence had experienced or witnessed trafficking, in striking contrast with people displaced for environmental reasons, such as evicted forest squatters - none of whom had been approached by traffickers.

The displacement crisis that hit

in 2007/08, the worst it has known, came when violence erupted after a disputed presidential poll and more than 600,000 people fled their homes.

Many lost their homes, possessions and family members and fled to places where they faced hostility from locals.

"You have nowhere to go," said Radoslaw Malinowski, HAART's chief executive, at the report launch. "If someone gives you a golden opportunity, you are happy to take it."

In February the government handed out Sh1 billion

($9.9 million) to resettle more than 5,000 IDP families still living in camps eight years after the violence.

The United Nations estimates there are still 250,000 IDPs in

Kenya. There is no official

passed a counter-trafficking law in 2010 but it has proved difficult to secure convictions because of the need to prove all three elements - the act of recruitment, the deceptive means and the exploitative purpose.

The charity called for more vulnerable

Kenyans to be educated about trafficking.