Two dead in Kajiado as protesters, police clash over land 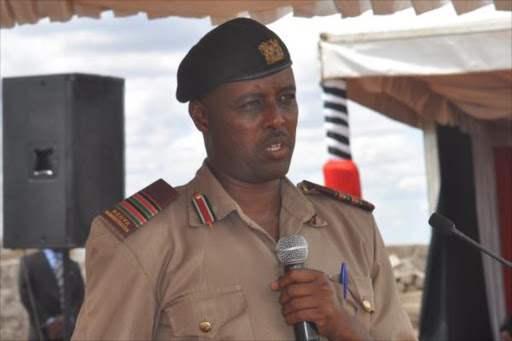 Two people have been killed in a clash between police and Maasai morans in Imbirrikani area of Kajiado County.

The demonstrating morans accused officials of Imbirrikani Group Ranch of “leasing out” a chunk out of their land to an international cement producing company based in Athi River.

Security personnel who requested anonymity said tension has been brewing after it emerged some of the group’s leaders made a “secret” arrangement to lease more than 1,000 acres to the company.

Speaking to the Star on phone, Kajiado South deputy county commissioner, Abdirisak Jaldesa, said a police officer was shot dead and another seriously wounded when four APs attempted to unblock the highway.

“It has been bloody scenes here, our officers tried all they could to talk to the morans to clear the road but instead, they started shooting and stoning our officers," he said.

"One of the men had a firearm which he used to shoot at our officers who died instantly”.

“They were not provoked and I will stand by my officers on this matter.”

“When we called the regular police, the morans came in droves and our officers retreated as we attempted to call in reinforcement,” he added.

The commissioner said after several hours of the standoff, a contingent of GSU officers arrived in Imbirrikani to restore order.

Jaldesa said another fight ensued after the morans regrouped and repelled the GSU officers who had attempted to approach them.

“The officers were firing in the air to scare them off but it appeared they were more provoked by the presence of the GSU,” he said.

“They confronted the officers even as the policemen fired in the air.”

Jaldesa said police were forced to use live bullets killing one person in the process.

Efforts by governor David Nkedianye and his deputy Paul Ntiati, who hails from the region, to stop the Morans from attacking the police fell on deaf ears.

Police managed to secure the road and by around 2:30 pm, more than 1,000 vehicles that had been held back by the bloody clashes began moving.

The road connects Kenya and the neighbouring Tanzania through Loitokitok town.

Witnesses told the Star while police had secured the road, more morans had converged in the nearby bushes.

“As I am talking to you things are not very good here because the morans have not left this area,” a witness said.

“They have just retreated and are on serious talks amongst themselves.”