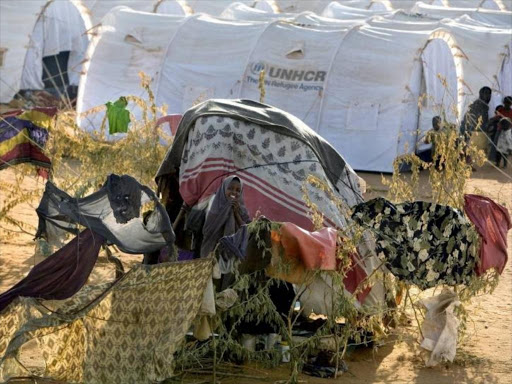 A key al Shabaab operative was on Friday arrested in one of the refugee camps in Dadaab.

This comes as the government has reiterated it wants the camps closed.

The operative is a Kenyan from Garissa who has been smuggling arms into the country.

Northeastern regional coordinator Mohamud Saleh said the suspect was arrested by a multi-agency security team that had been tracking him.

Saleh who was addressing the press in his office disclosed that the suspect was a Kenyan who hails from Garissa county is a senior Al-Shabaab operative who has been involved in smuggling arms into the country.

He added that he is also suspected of involvement in the planning and execution of terror attacks from the within the refugees camps.

“The arrest of this key Al-Shabaab operative is a key beak through in the fight against terror,” he added.

The regional coordinator who was

said the suspect is being interrogated by a multi-agency security team involved in the fight against terror in the country.

Ambassador Saleh said that the security agents also recovered an AK-47 rifle, 19 rounds of ammunition and 2 magazines from the suspects hideout.

He said that the police are pursuing two other accomplices to the suspect who is on the run.

“We have managed to push the Al-Shabaab operatives out our borders and they being cited out of our territory,” ambassador Saleh added.

He thanked members of the public for volunteering information that has led to major arrests and recovery of deadly cache of weapons from the Al-Shabaab terror suspects and their accomplices.

a courtesy call in his office yesterday, Ambassador Saleh said Kenya can no longer host the Somali refugee inside Kenyan soil and asked them to come with a plan to repatriate the more than 350,000 refugees back to Somalia.

He said the refugees have not appreciated Kenya’s gesture and some of them were aiding Al-Shabaab militants in planning and execution of terror attacks from inside the Dadaab refugee camps.

The administrator regretted that the Westgate and the Garissa university terror attacks were all planned and executed from the refugee camps.