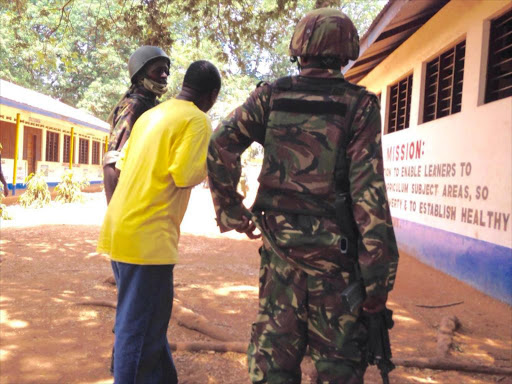 KDF soldiers were on Monday deployed to polling stations in Malindi including Central Primary School.

The Kenya Defence Forces soldiers were tasked with ensuring voting and tallying were conducted peacefully and without interruptions.

They arrested Fondo Weu at

for allegedly having cash and a list of polling stations in the constituency.

Weu was arrested on suspicion that he dished out cash to voters. He was handed to AP officers patrolling Malindi.

It was earlier reported that rowdy youths attacked

Athman at the polling station, forcing police to shoot in the air to disperse them.

Athman was rescued by police officers from the youths who stormed in and stole Sh1,200.

Election officials said the trend has been to attack leaders in a bid to confuse voters and delay the exercise.

"It seems youths were hired to cause havoc to ensure the voting process is not smooth," one said.