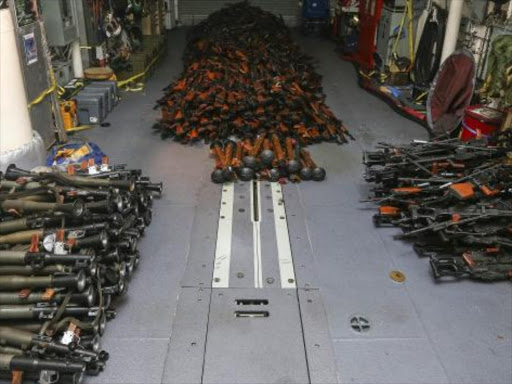 A cache of weapons, reportedly meant for Somalia terror group al Shabaab, that was intercepted by Australian Navy off the Coast of Oman, March 7, 2016. Photo/COURTESY

A large cache of assorted weapons suspected to belong to al Shabaab was on Monday seized by an Australian warship patrolling the Oman coast.

The vessel was spotted by the HMAS Darwin crew about 170 nautical miles (314.84 kilometres) off the coast of Oman, the news agencies reported.

A naval team was sent to investigate and carry out a “flag verification exercise”.

The team carried out a search on finding the

vessel ­was unregistered, making it stateless.

The seizure said to be the largest ever intercepted found a cargo of weapons hidden under fishing nets and other assorted cargo.

The vessel also had 18 occupants of various nationalities but officials said they were verifying the validity of their identification documents.

Military and defence experts sought to find out the possible sources of the weapons following several assaults by the al Qaeda-linked terror group.

The latest attack was on a Kenya Defence Forces camp in El Adde, Somalia, that left dozens of soldiers dead and others reportedly captured. The government is yet to formally release the figures but reports put the casualty at more than 100.

HMAS Darwin, also known as FFG 04 of the Royal Australian Navy, is in the Middle East as part of a multinational ­operation to intercept terrorists, smuggled drugs and other goods that finance the group's operations.

The force is a multinational ­effort to prevent terrorism, piracy and drug smuggling, encourage regional co-operation and promote a secure maritime environment in the Middle East and off the northeast coast of Africa.

Vice Admiral David Johnston, chief of the Australian Defence Force’s Joint Operations Command, said the seizure of such a large haul of weapons on Darwin’s first patrol in the ­region was significant.

"The successful boarding and subsequent seizure of the weapons concealed under fishing nets highlights the need to remain vigilant in the region," he said.