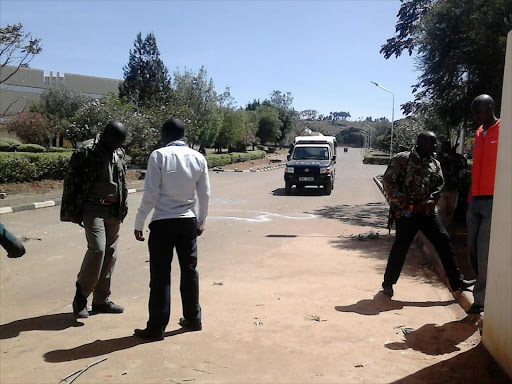 Anti-riot police at the Moi University campus in Eldoret town, where students on the rampage destroyed a bus and hurled stones at buildings in a protest against the absence of lecturers, March 2, 2016. Photo/MATHEWS NDANYI

rioted on Wednesday against the two-month absence of lecturers over a salary dispute.

The West campus students destroyed a bus and threw stones at buildings before anti-riot police were called in, arresting more than 30 of them.

The university's director of the Privately Sponsored Students Programme, who is also in charge of the campus, said the problem was being addressed.

"We know property has been destroyed but we are meeting to tackle issues raised by the students," Daniel Tarus said.

The campus, which has more than 2,000 students in parallel degree programmes, will remain open as the issues are resolved, he said.

Security officers at the campus roughed up journalists in a bid to keep them from taking pictures at the college.

They were told to seek authorisation before taking any pictures.

"The lecturers say they have not been paid for months and some are owed up to Sh2 million in arrears. We are wondering why they are not being paid yet we have paid fees," Ruto said.

"The country and our parents must know we are being 'wasted' yet parents paid fees. Corruption is running the university; money meant to pay lecturers is stolen by senior officials."

Ruto said lecturers should be paid so that they resume work by Friday, failure to which there would be more riots.

He noted that students had not sat their end semester exams and raised questions about the graduation of fourth years.

The university's students rioted for the same reason in 2014 and

in a strike to demand pay.