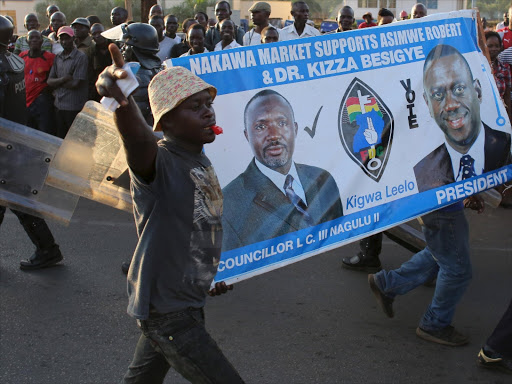 While Museveni has presided over notable economic growth, critics - especially the young - accused him of not tackling corruption or creating jobs and of acting increasingly like an autocrat, and forecast the vote would be rigged.

Police in capital Kampala set off stun grenades and loosed tear gas volleys outside the headquarters of Besigye's Forum for Democratic Change (FDC) party as tensions rose after a largely peaceful ballot held a day earlier.

Besigye was later detained for the third time this week, being bundled into the back of a police van along with several of his supporters, according to a Reuters witness.

Early results showed Museveni, a Western ally against security threats including militants, with a sizeable lead of 62 per cent based on a count of ballots in 37 per cent of polling stations. Besigye trailed with 33.5 per cent of the vote.

Dan Mugarura, a senior FDC official, said the party disputed the released results as there were "glaring discrepancies" compared to reports from polling stations.

Besigye, who challenged the 71-year-old Museveni unsuccessfully in three previous elections, has repeatedly insisted the election would not be free and fair and on Thursday accused the government of manipulating the vote.

Late on Thursday afternoon, Besigye was briefly detained in Kampala for alleged criminal trespass and assault.

A senior official with Besigye's party said he had been leading a crowd of supporters to a building where he complained that ballot stuffing was under way. Police called Besigye's accusations unfounded and outrageous.

Uganda's commitment to a transparent election, free from intimidation.

Election Day was otherwise largely peaceful, although voting was delayed in some areas, especially in the capital, and access to social media sites like Twitter and Facebook was blocked for much of the day, frustrating voters.

On Friday morning, voting resumed in a handful of areas where delays in delivering polling materials had prevented some people from casting their ballot.

"It's our right to vote," said Geoffrey Were, 32, as he stood waiting for the second day in a row in the Ggaba neighbourhood of Kampala. "This man has ruled us for 30 years. Obviously we need a change."