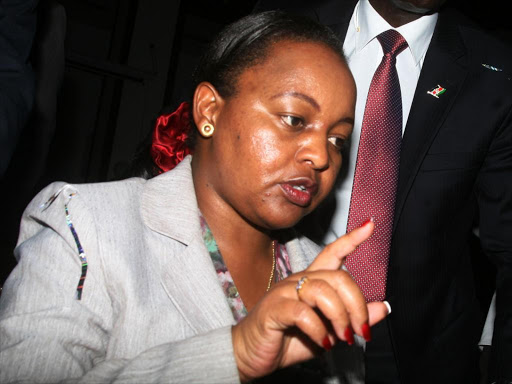 her to take Sh10 million to her Runda home

Sh80 million to head of Banking Fraud to cover up theft

One of the key suspects in the Sh791 million alleged theft at the NYS has placed former Devolution CS Anne Waiguru at the centre of the scandal.

In a 16-page affidavit filed in court yesterday, Josephine Kabura, whose account received the money, described her alleged relationship with Waiguru.

However, Waiguru dismissed her as a “crazy woman” whom she has never met and came to know about only after the scandal broke.

“After all this time, it is only now that she remembers that she came to my house with Sh10 million? And I hope she knows that lying under oath lands people in jail,” Waiguru told the Star last evening.

Kabura says that, prior to the Sh791 million contract, Waiguru had assisted her to “secure other contracts, with about 30 LPOs for my other companies, at NYS, with a value in excess of Sh400 million”.

She described how she took “Sh10 million to Waiguru's house in Runda on August 26, 2015”, which she was later told would be used to clean up her image in the media.

“While in her house, she informed me that my name would be included on the charge sheet with my three companies, but since there was delivery of works and genuine documentation with processes, CS Waiguru assured me that only ‘funny’ charges would be preferred against me,” Kabura said.

But Waiguru dismissed the claim, saying that she lived in Kihingo in August 2015 and has never met any of the journalists mentioned in the affidavit.

“She needs to do her homework. The fact that I was not living in Runda discounts all her claims. I don’t know why people keep dragging me into this issue, especially since my name was cleared,” Wiaguru said.

Kabura also claimed that Waiguru introduced her to the head of the Anti-Banking Fraud Unit, Joseph Mugwanja, whom she says even paid her bail when she was taken to court.

Her affidavit also claims that Waiguru at one point told her to give Mugwanja Sh80 million that she had kept in moneybags in her safes.

“CS Waiguru said they would keep it safely away from NIS, who had been looped into the case,” Kabura said.

Kabura said that she has known Waiguru, whom she called a great friend and acquaintance, since 2012, when the future CS worked as the director of IFMIS at Treasury.

“We soon started off by her giving me small jobs like having my technician maintain her silver MacBook laptop, which I gathered was quite dear to her,” Kabura said.

But Waiguru insisted that she has never met the woman and challenged her to produce evidence of any communication that has ever happened between them.

She added that she held regular Sunday meetings with Harakhe, Noor and other officials at NYS headquarters, where “we shared and brainstormed on the deliveries and . . . payments and upcoming LPOs”.