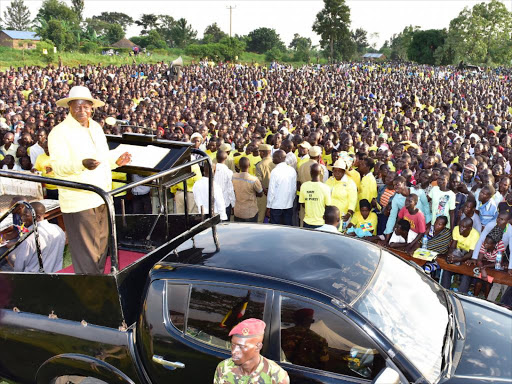 ODM has accused Jubilee of using public resources to drum up support for Ugandan President Yoweri Museveni ahead of the country’s general election on February 18.

The Ugandan elections have sparked a lot of interest among Kenyan politicians, with both Deputy President William Ruto and opposition leader Raila Odinga being actively involved in campaigns.

Ruto in December joined the Uganda campaign trail and participated in several road show campaigns drumming up support for Museveni.

Raila in October met the Ugandan opposition pair in Nairobi.

Yesterday, ODM demanded that President Uhuru Kenyatta explain the logic behind the government’s involvement in Uganda’s general election campaigns and what it means for Kenya.

In a statement, ODM said the move is a partisan and blatant way of undermining Kenya’s integrity as a nation and its economic and security standing in the region in future.

“We remain deeply concerned about the involvement of the Kenyan government in the ongoing Ugandan presidential election campaigns in support of incumbent President Yoweri Museveni,” ODM said in the statement signed by director of elections Junet Mohamed.

The involvement goes against the tenets of good neighbourliness and the spirit of East African cooperation, the Suna East MP said.

“Kenya’s involvement in Uganda elections also sets a dangerous precedent that will see incumbents openly rally behind each other,” Junet said.

“This is in total disregard of the thinking and feelings of the voting population’s views and feelings.”

The matter raises questions as to what happens if opposition leaders Besigye or Mbabazi win the election, he said.