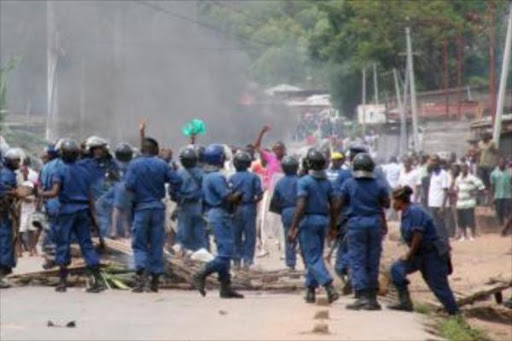 A file photo of Burundi protests.

Human rights crusaders have written to AU security committee and head of states meeting in Ethiopia to intervene into Burundi crisis that have left 400 civilian dead and displace 230,000 others.

Burundi sunk into civil war after president Pierre Nkurunziza contested the presidency for the third term against the country's constitution causing political upheavals in the country.

"A sharp increase in extra-judicial killings since December, allegations of gang rapes and torture by security forces, and the discovery this month of mass graves, are all indications that the situation is deteriorating rapidly," the letter reads in part.

The group consisting of eminent Africa personalities including Mo Ibrahim Foundation founder Mo Ibrahim want the AU to address the issues of political violence in the continent.

"In South Sudan, which should be reaping the benefits of the August 2015 peace agreement and seeking accountability for past crimes, distrust and animosity is running high between former foes and the return to war is a possibility," states the letter.

The group says violence has been spreading to previously unaffected parts of the country and nearly 200,000 civilians remain under UN protection in crowded camps and the threat of famine is looming.

The AU and its leaders, have the opportunity and a responsibility to respond to these crises, before they get any worse.

In December last year, the AU Peace and Security Council resolved to send an AU force into Burundi to prevent a further escalation of violence.

Similarly, in response to the peace deal in South Sudan, the AU Commission pledged to set up a hybrid court to prosecute those who had masterminded the civil war.

Unfortunately, neither of these decisions has yet been fulfilled and the contexts in both countries have worsened and Nkurunziza vowed to block entry of 5000 AU peace forces.

"This is a grave test of AU credibility, and of the continent’s ability to solve its own problems. Failure to act now would dent the reputation of the institution and those at its helm, and constitute a betrayal of the ordinary civilians in both countries whose lives are gravely affected by continuing violence and a lack of accountability," the lobbyists say.

"It is critical that the AU’s decisions on Burundi and South Sudan are implemented immediately, in order to fulfil our collective commitment to prevent crimes against humanity‎ and assist those at risk of grave harm. Vested interests and political allegiances cannot be allowed to prevail".