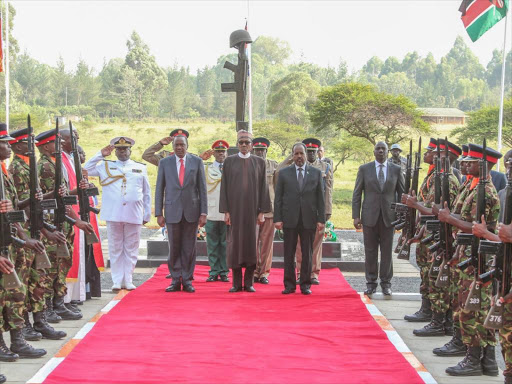 President Uhuru Kenyatta yesterday announced Kenya will not pull out of Somalia, despite the massacre of its soldiers.

He said KDF will pursue al Shabaab terrorists “to their last hideouts”.

“We will continue in Somalia to fulfil our mission. Some, whose courage has failed, want to give up the mission now,” Uhuru said.

“They want to retreat, to leave the field to the enemy in the hope that he will leave them alone.”

He spoke in Eldoret during a memorial service for soldiers killed on January 15 in El Adde, Somalia.

It was held at the 9th Kenya Rifles, Moi Barracks.

He received full state honours including a 21-gun salute from the KDF.

Uhuru said those calling for KDF’s withdrawal have “forgotten the enemy has made it clear he will follow us home”.

Uhuru said completing the mission is the right thing to do for security.

He said: “This is not the time to waver or listen to the voices of defeat. This is the time for the people and the government of Somalia to choose peace.”

Uhuru unveiled a statute erected in memory of the fallen soldiers.

Post a comment
WATCH: The latest videos from the Star
by MATHEWS NDANYI
News
28 January 2016 - 05:00
Read The E-Paper