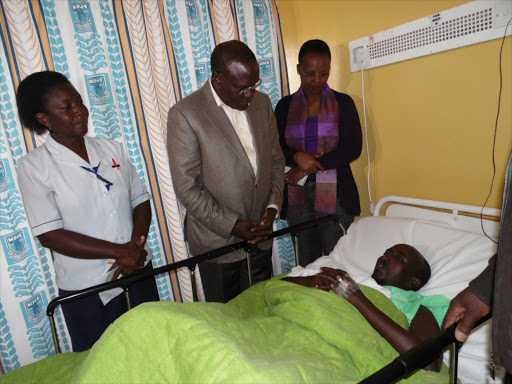 A man who was injured shielding Christians in the has died.

Sabdul Farah, 40, died on Sunday night at the Kenyatta National Hospital after being admitted for three weeks.

Farah was until his death the deputy headmaster at Mandera County Primary School and a student at Maasai Mara University.

The father of five was part of a group of commuters who on December 21, 2015, refused to be separated from their Christian colleagues when ambushed by terrorists near

Kotulo a few kilometres away from Mandera

They dared the suspected al Shabaab militiamen to either kill all passengers on the Mandera-bound bus or leave.

The militants left fearing retaliation by residents from nearby villages, but only after shooting at the bus as it drove away, killing two people and injuring three.

Farah, who took bullets on his arm, was taken to

Mandera hospital, before being flown to Nairobi for specialized

treatment at KNH on December 25.

Two weeks ago, police offered a said to be involved in the attack.

In a condolence message to the family, Health CS Cleopa Mailu said Farah started bleeding profusely before his death.

"We hoped to save his life so he can live as a testimony and a teacher of being a brother's keeper," Mailu said.

"The hospital did its best

the brave soul succumbed to complications from the injuries on Sunday night. We share our sorrows, and pray for the strength to the family so as they can bear with

Speaking to the Star on Monday, Farah's brother Rashid said the death should bring religious harmony and encourage Kenyans to live as one community.

"He was responding well to treatment. On Sunday, the situation worsened and was in deep pain. But Inna lillahi wa

we belong and to him we return)," he said.

Rashid called on well wishers to step in

help Farah's family as he was the sole

At the time of going to press, the family was preparing for burial at Langata cemetery as per the Islamic teachings.