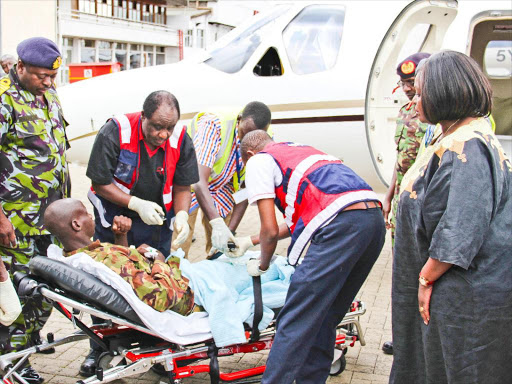 RESCUED: One of the injured KDF officers lies on a stretcher at Wilson Airport yesterday after he and other soldiers were attacked by al Shabaab in Somalia on Friday last week. Looking on is Defence CS Raychelle Omamo

THE government yesterday confirmed al Shabaab militants are holding an unspecified number of Kenyan soldiers hostage following Friday's deadly raid on a military base in Somalia.

“It should be noted that this is a delicate operation as we have information to the effect that some soldiers are being used as human shields and we will not allow any further casualties,” he said.

The government remained tight-lipped on numbers of casualties arising from the deadly incursion on the base in El Adde in the Gedo region within the semi-autonomous Jubaland administration.

The militants claimed they killed at least 100 soldiers and drove away 28 military vehicles. They said the attack was carried out by the Saleh an Nabhan Battalion.

Yesterday, four injured officers were flown to Nairobi for specialised treatment aboard two civilian aircraft that landed at Wilson Airport. Two of the soldiers walked unaided, albeit staggering, while two others were carried in wheelchairs to a waiting ambulance as they had severe injuries from the waist downwards.

They were rescued miles from their camp where the attack took place on Friday morning. Other soldiers are being treated in Wajir, Gen Mwathethe said.

Sources told the Star at least 12 officers are being held by the terror group as prisoners of war (PoW) while 15 others are missing in action (MIA).

CS Omamo said search, rescue and recovery operations for the MIA remain “dangerous, volatile and fluid” and soldiers are still at risk.

“Information regarding casualties and the fallen will be availed to affected families directly as the rescue, recovery, verification and consolidation operations continue,” she said.

Omamo said the camp hosted a “company size force”. A company normally consists of 80–250 soldiers usually commanded by a major or a captain.

She said the attack by the militants will not “rest unanswered”.

“This atrocious terrorist attack, though extremely painful to us as a nation, will not dampen the determination of our soldiers in the fight against terrorism.

“We commend our soldiers for their resolve in the face of the existential threat arising from terrorist groups in Somalia.

“KDF will continue in concert with our allies to face, to tackle and fight the enemies of peace and freedom in our region.”

Mwathethe declared “relentless war” on terrorism and asked for calm as the rescue and recovery process continues.