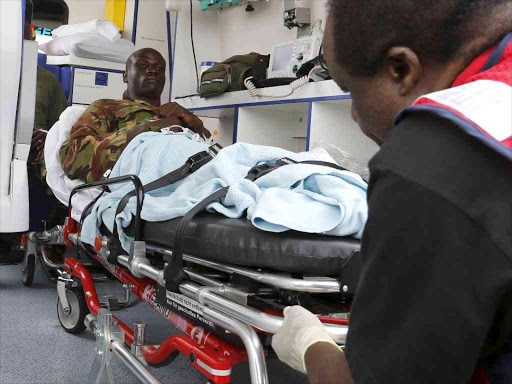 A wounded Kenyan soldier serving in the African Union Mission in Somalia (AMISOM) is assisted by a paramedic into an ambulance at the Wilson airport in Kenya's capital Nairobi, January 17, 2016. Photo/REUTERS

Two Kenyan soldiers who survived the

on an African Union base in El Adde, Somalia, tried in vain to call their families and seniors.

Private officer Joseph Muganda and a colleague escaped with their guns and mobile phones after the ambush last Friday.

The militants rammed a suicide car bomb into the

of the base in Ceel Cado, about 550 km west of Mogadishu, near the Kenyan border, before their fighters burst inside.

The attack was reportedly launched against a company-size force of soldiers but it was not clear if this was the size of the Kenyan contingent in the area. A military company can range between 80 to 250 soldiers.

Muganda said they escaped to a bush and tried to figure a way out. He said he could not have fled without his colleague

who sustained a leg injury.

at Busara area, a few metres from the camp on Sunday.

They had served in Somalia for two weeks and were among four soldiers who were early Sunday in stable condition.

In a statement at the airport on Sunday, Defence CS Raychelle Omamo said other soldiers were earlier flown in via Moi Air Base.

Details will be sent directly to families, Omamo said, adding:

"Allow the families privacy as they mourn. Full details of those injured and killed will be made public after families affected are notified."

The CS said more KDF troops, alongside others serving under Amisom, will be deployed to the camp following the attack whose number of casualties is yet to be released.

He noted the need for details on the assault but asked the public not to share information that could compromise Kenyan troops' pursuit of the terrorists.

Al Shabaab's earlier claimed it in the ambush but

did not give the number of soldiers being held. The group also said in a statement that more than 100

soldiers were killed, revising the number up from 63.

Some Somali websites reported 15 KDF soldiers were still stranded and had been hiding in bushes away from the camp.