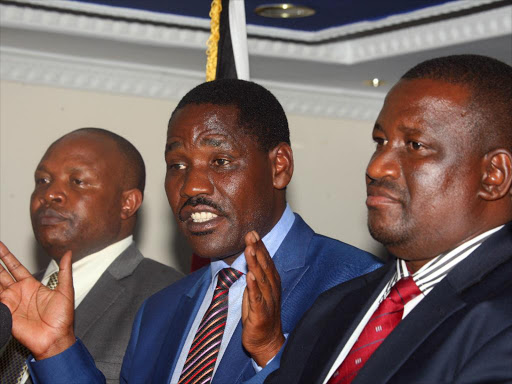 Governors yesterday asked for over an additional Sh28 billion, saying they need more cash to run the counties.

The Sh5 billion the Commission on Revenue Allocation said should be allocated to counties for coordinating the participation of communities in governance should be increased to Sh10 billion, they said.

They said counties should get more cash from the fuel levy fund.

CRA has recommended counties to get 15 per cent of the fund through a conditional allocation.

“The council maintains that this figure should be increased to 84 per cent since county governments are managing 210,000km of roads,” Munya said.

They commended the CRA proposal that counties get an additional Sh27 billion in 2016-17 for roads.

Munya said the national government has spent more than 20 per cent of its overall budget on education, yet little has been invested in financing youth polytechnics that are essential in developing skills of those who do not go to university or college.

“Youth polytechnics, if well equipped, are good centres of excellence to empower youth with skills that support generation of employment opportunities,” he said.

The CRA had recommended that county governments be allocated a conditional grant of Sh6.3 billion from the national government share to build, equip and renovate village polytechnics.

The grant will be shared among all counties based on the approved revenue sharing formula.

The council also wants to construct and rehabilitate schools in deplorable conditions.

The COG maintained that the Intergovernmental Relations Committee must be strengthened legislatively and financially to take over from the Transition Authority.

Munya urged Attorney General Githu Muigai, Roads ministry and TA to expedite the transfer of class D and E and unclassified roads as ruled by courts.

He warned the AG and the Kenya Law Reform Commission against overstepping their mandates.

He said they should ensure county laws already assented to are published by the government printer.