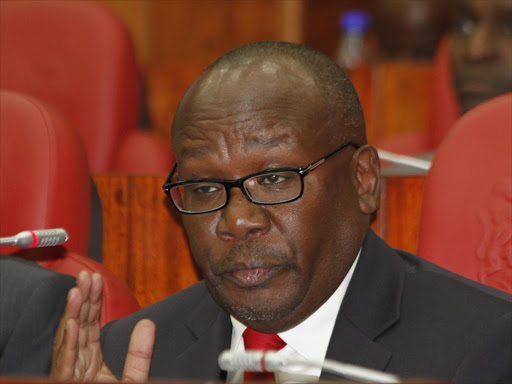 A Nairobi cleric has faulted the proposed laws by Attorney General Githu Muigai to regulate churches saying they are unfair and discriminatory.

Bishop Edward Mwai said preaching is a noble undertaking and a gift from God.

The bishop addressed a press conference on Sunday at Jesus Winner Ministry church in Roysambu.

"Nobody including the state should limit God.We are doing God's work because we have a gift from God,"' Mwai said.

In the draft laws Muigai has proposed that practicing pastors must be holders of certificates, diplomas or degrees in Theological studies from reputable institutions.

Muigai said the regulations aim to tame rogue pastors who have been conning unsuspecting Kenyans of their money.

Mwai however said the state should deal firmly with individual pastors who con their congregations and other unsuspecting Kenyans.

He added that it is wrong for the state to generalise preachers.

"The government has been urging all church leaders to pray for peace and unity in the country, but it has never told those without theological background not to pray," Mwai said.

He called for the government to appreciate talent and God's gifts. He said successful gospel musicians and other artists do not have diplomas and degrees adding that studying theology does not stop one from conning Kenyans.

The cleric whose ministry has branches countrywide, and who commands a huge following said even the Holy Bible was not authored by professors but by common men inspired by God.

Mwai said the government should also demand that all church members must be educated if it requires church leaders to hold such qualifications.

"If the church can accommodate both the literate and illiterate,why intimidate pastors?" Mwai posed.

Post a comment
WATCH: The latest videos from the Star
by ALBERT NYAKUNDI
News
11 January 2016 - 18:00
Read The E-Paper