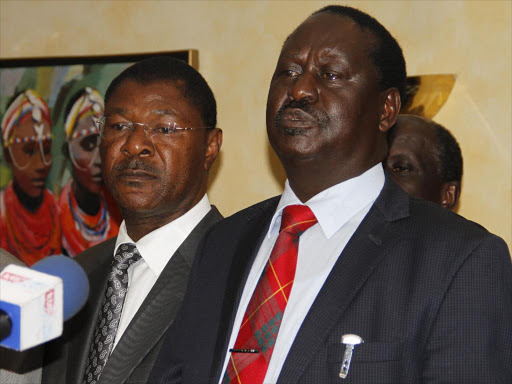 Raila Odinga with other Cord leaders during a press conference dubbed ‘the State of the Nation’ at the Serena Hotel, Nairobi,yesterday. He claimed the proceeds of corruption are financing electoral rigging.Photo/Monicah Mwangi

The opposition chiefs yesterday accused the Jubilee Coalition of “laying the groundwork” to steal the 2017 polls.

Cord’s bigwigs said President Uhuru Kenyatta is presiding over the most corrupt administration in Kenya’s history and claimed that proceeds from corruption have been invested in the machinery for rigging the general election.

Cord announced they will conduct a lifestyle audit of Deputy President William Ruto and accused him of splashing around public cash to buy opposition MPs to join government.

“The DP must desist from making these unhelpful trips [to opposition strongholds] because he is squandering public funds,” he said.

At a press conference, Cord co-principals Raila Odinga and Moses Wetang’ula insisted that the coalition will accept nothing less than a free and fair election in 2017.

“You must know, as we all do, that this country cannot and must not risk another election that does not enjoy the confidence of all parties,” Raila said during the function held at the Serena Hotel, Nairobi.

Among the issues the leaders raised are failure by the state to fund the IEBC to properly prepare for the election and failure by the government to address serious legitimacy issues surrounding the commissioners following the controversy of the 2013 elections.

Raila said failure by the IEBC to prepare for the election favours the incumbent.

“We will not sit by and let the Jubilee administration undo all we have struggled for, a struggle in which many lives have been lost and many years of freedom lost,” he said.

Raila said President Uhuru has rejected discussions with the opposition on how to ensure there is a level playing field ahead of 2017 and an IEBC acceptable to all.

The former Prime Minister told Kenyans to stand up and defend the constitution, saying they have a right to demand accountability for their taxes and money borrowed in their name.

He said every Kenyan of 18 years and above has a right to vote in a free and fair election and urged them to demand that the government delivers on this. “We urge all young people who have attained the age of 18 and who have not been issued with ID cards to demand to be issued with IDs without delay.”

Among other things, Raila announced the Cord agenda for 2016 includes challenging “the retrogressive laws approved by the President”.

The laws include the amendments to the Judicial Service Commission Act, the National Police Service Act and the Public Audit Act.

Through the amendments, the President has recovered powers to appoint the Chief Justice, hire and dismiss the Inspector General of Police and the deputies. The Auditor General is also losing his independent powers.

“We are back to the era when the President would dismiss or appoint the head of Police or head of Judiciary through a 1pm radio announcement.”

Cord pledged to challenge the law amendments and promised to “vigorously” pursue its Okoa Kenya referendum and accountability for and recovery of the proceeds of the Eurobond.