Jubilee will win 2017 poll 'even if by buying, stealing' votes - Shahbal 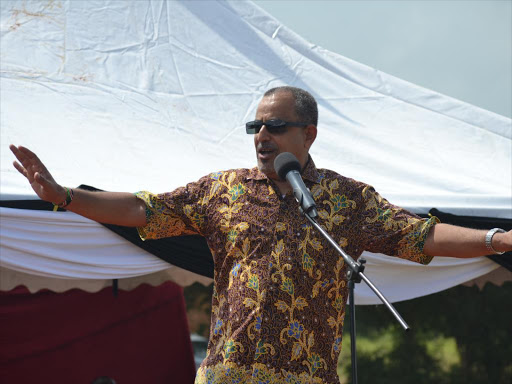 Mombasa politician Suleiman Shahbal has said the Jubilee Party will win the 2017 general election by force.

Following the remarks, Kilifi Governor Amason Kingi has said action should be taken against Shahbal.

Kingi said he obtained video tapes of the politician's statements, which he said were a reflection of what Jubilee intends to do during the next poll.

“This is a clear indication that Jubilee is not loved at the Coast. That is why they want to use crude means to win the elections. We will not let them go unpunished. The law must take its course,” he said.

He told the press in his office on Tuesday that he will forward the tapes to government agencies for investigations and that Cord will seek legal redress over the matter.

Shahbal recently joined the Jubilee Party after defecting from Wiper. He also contested for Mombasa Governor in the 2013 poll but lost to Hassan Joho.

Nairobi ODM chairman George Aladwa has also been on the spot for utterances described as amounting to incitement to violence.

He was allegedly saying people would have to die for Cord leader Raila Odinga to become president in 2017.