Eastleigh boycotts levies to Nairobi from 2016 over poor services 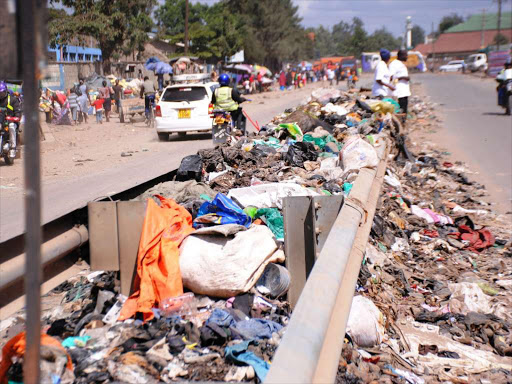 Garbage dumped in the middle of the road in Eastleigh on December 23 last year. Two county officials are blaming each other for the mess.

Eastleigh business owners and landlords have resolved not to pay dues to the Nairobi government over the lack of basic services.

The decision not to pay fees including licence charges and land rates from 2016 was reached on Monday after meetings with business owners.

Eastleigh North MCA Osman Ibrahim notified the business owners of the resolve in a memo in which he said he has asked a lawyer to seek a court order stopping the payments.

Noting "the constitution allows peaceful protests for one's rights", he assured the traders of support.

Kenyans on Twitter had earlier criticised Governor Evans Kidero over heaps of uncollected garbage in several parts of the city including Eastleigh.

In June, area residents took to the streets in protest against the filth that has blocked parts of some roads. The Nairobi garbage collection department stepped up but not for long.

Eastleigh business owners have made , including launching a business summit early in December.

Thousands of shoppers throng the area where some poor roads have been tarmacked but a profile of terror, contraband and piracy continues to haunt it.