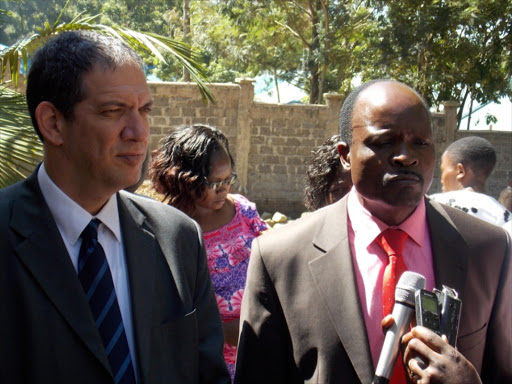 Ambassador Yohel Vilan and Migori Governor Okoth Obado in Migori town on Monday when the Israeli government made donations to the county's flood victims. Photo/MANUEL ODENY

The Israeli government has made donations to Migori county flood victims in a show of friendship with Kenya following a request by the Governor.

The items were distributed to Nyatike and Suna East constituencies on Monday in an occasion that Ambassador Yohel Vilan said was not an official visit.

Speaking at Governor Okoth Obado’s office in Migori town, Vilan said the aim was to celebrate the holidays with the victims.

“The move will go a long way in mitigating effects of El Nino rains," he said, adding the Israeli government also donated a solar water heater for a school in the county.

Obado said Israel was the first country to respond to his pleas.