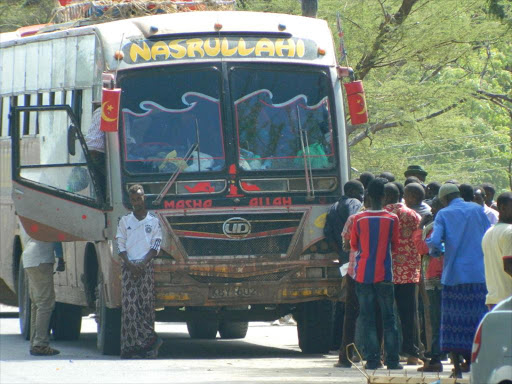 Passengers aboard a bus belonging Makah express company being checked at the Garissa-Tana bridge police barrier on 15th of November 2015. Two people was killed and three others injured when a bus belonging to the same company was attacked by gunmen at Dabasity near Elwak town on December 21, 2015. Photo/STEPHEN ASTARIKO

In the 6.45am attack, the driver of a lorry and a passenger in a Makkah Express bus were shot dead by the militias on the Wajir-Elwak road.

According to Northeastern regional coordinator Ambassador Mohamud Saleh, the bus and the lorry had left Kotulo for Mandera town without police escort.

He said the militias started firing at them and killed the lorry driver on the spot.

The bus driver defied orders from the militias to stop and instead sped off.

“The bus and the lorry did spend a night at Kotulo and they were to be escorted by the police to Mandera because the place is prone to attacks but they decided to leave on their own,” Saleh said.

The regional boss said all passengers in the bus and lorry have been accounted for.

No one was kidnapped as earlier reported in a section of the media and the bus was allowed to proceed with its journey with police escort, he said.

Saleh said the bodies of those killed were taken the Elwak Hospital as well as the injured.

“The victims sustained bullet wounds but they are all in stable condition. We don’t want to disclose the identities of those killed before we inform their relatives,” he said.

Security officers were deployed in the area to pursue the gunmen who were said to have fled into the bush.

By the time of going to press no one had been arrested.

On November 22 last year, 28 passengers were killed by al Shabaab militias around the same place.

Since the incident, all buses going to and from Mandera are escorted by armed police.