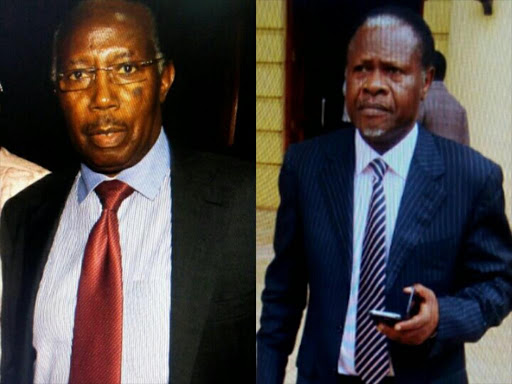 Samuel Gichuru and Chris Okemo have lost a bid to stop their extradition to Jersey Island over a money laundering case.

A court in Jersey issued a warrant for their arrest on April 20, 2011 after the island's Chief Justice accused them of defrauding Kenya Power and laundering proceeds in the UK.

Judge Isaac Lenaola ruled that issues they raised at the High Court can be canvassed at the magistrate's court which has okayed their handover to Jersey authorities.

DPP Keriako Tobiko has the power to determine merits of the case, Lenaola also said, and added that the DPP can initiate the extradition.

In the ruling on Friday, he also said the rights of the two were not violated as their lawyer Fred Ngatia claimed.

Gichuru and Okemo went to court to block their extradition and also challenged the power of the court to extradite them.

They further said they feared an unfair trial in Jersey, considering the publicity surrounding their case, and applied to it referred to the High Court.

But City Hall chief magistrate Teresia Muregi declined to block the extradition saying no incidents of mistreatment, as they claimed, had been presented to her.

She said the issue of jurisdiction will be addressed in the Jersey court once the accused are arraigned.

Gichuru and Okemo are facing 53 charges relating to commissions paid by international companies, mostly between 1999 and 2002.

Gichuru was KPLC managing director between 1983 and 2003 when it was partially privatised. Okemo was Energy minister from 1999 to 2001 and then Finance minister from 2001 to 2003, when the embezzlement allegedly took place.