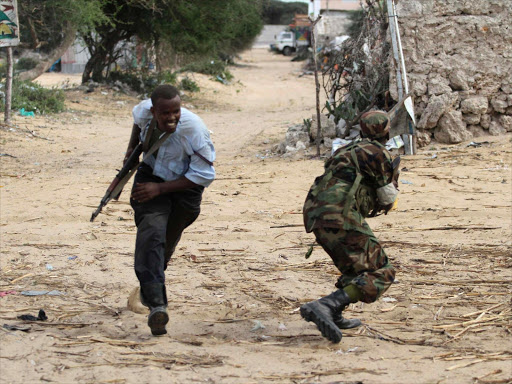 COMBAT:Somali government soldiers run to position during an ambush by al Shabaab rebels on the outskirts of Elasha town May 29, 2012,KDF has said it will stay in Somalia until Al Shabaab is eliminated.Photo/Reuters

Al Shabaab has claimed responsibility for an attack in Lamu county that left two people dead, the militants and police said on Thursday.

The area was the scene of several attacks by the Somalia-based and al-Qaeda linked group in 2014.

Al Shabaab said the attack was the fifth in the last 10 days.

Wanjohi said about 15 militants attacked a lorry and a police truck driving behind it. They killed two civilians in the lorry and wounded a police officer driving the police truck, who escaped by hiding in the bushes.

The gunmen drove off with the police truck, lorry and the policeman's rifle, he said, adding are ongoing.

The April 2 massacre at the Garissa University College left 147 dead and at least 79 injured.

Since the Garissa raid, al Shabaab has carried out many smaller attacks along the northern coast before retreating to hideouts in Boni forest, a large reserve that is also a sanctuary for elephants.

The KDF has launched several offensives to flush out the militants, who say the attacks are punishment for Kenyan soldiers fighting the group as part of an African Union peacekeeping force.