State on the spot for extrajudicial killings 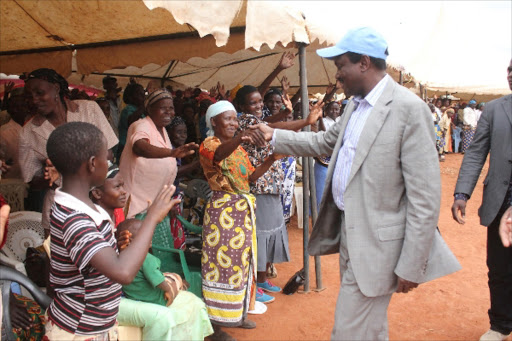 POLITICAL and civil society chiefs yesterday criticised the government over enforced disappearances, extrajudicial killings and incarceration of Kenyans in Uganda and South Sudan.

Wiper leader and former Vice President Kalonzo Musyoka said disappearance is a weapon used by the government to generate anxiety, fear and worry.

He spoke during the International Day of Victims of Enforced Disappearance in Nairobi.

Kalonzo said not only the Muslim community is affected but also non-Muslim witnesses, human rights defenders and victims’ relatives.

“It is no secret today that enforced disappearance coupled with extrajudicial killings are used to silence perceived terror suspects and ICC witnesses,” he said.

Seven Kenyans were renditioned in 2010 and are being detained in Uganda.

Meanwhile, five Kenyans have been held in a military camp in South Sudan for 90 days.

Kalonzo said the government has abdicated its responsibility of protecting and bringing back the Kenyans to be tried in the local courts.

Siaya Senator James Orengo said the continued disappearance and extrajudicial killings are a sign that the regime lacks faith in democracy or the constitution.

He said the government is suffering from legitimacy issues and opts for killings rather than due process.

His Mandera counterpart Billow Kerrow said the country is headed in the wrong direction.

Kerrow said victims are picked up by security officers in plainclothes and privately registered cars.

They are then taken to government facilities like military camps, he said.

Kerrow said continued extermination of suspects is creating a cycle of violence.

Former speaker Farah Maalim said: “The first Kenyatta had his excesses but we have never had an excess of this magnitude as has been the case with Jubilee for the short time it has been in power.”

He said the Jubilee government is engineering terror threats to endear itself to the West.

Narc Kenya leader Martha Karua said the government should be held accountable for all the disappearances and extrajudicial killings.

It has failed to produce the victims or even investigate incidents, she said.

The participants petitioned the United Nations Committee on Enforced Disappearances and the Counter-Terrorism Committee Executive Directorate to intervene.

They said the operations of the ATPU are marred by human rights violation.

The event was organised by human rights activist Al-Amin Kimathi and Amnesty International.