How 2013 elections were rigged in favour of Uhuru, claims Raila 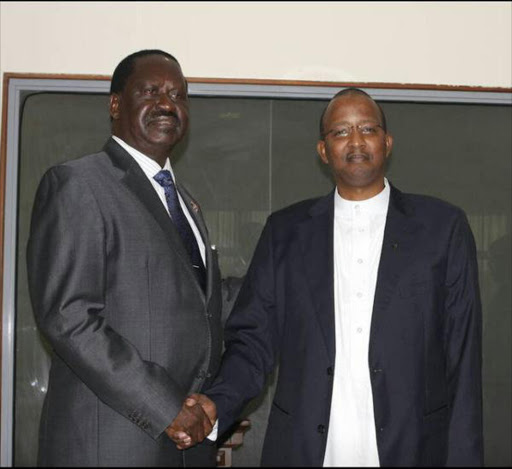 OPPOSITION chief Raila Odinga has held talks with IEBC chairman Issack Hassan for the first time since the disputed 2013 polls and reiterated they were rigged.

During the meeting at Raila's office in Nairobi yesterday, the former PM told Hassan how he thinks the polls were rigged in favour of President Uhuru Kenyatta. He said, for example, that the provincial administration and the national spy agency were massively involved in manipulation of the vote.

“The leaders questioned what former NIS boss Mr Michael Gichangi’s role was at the Bomas of Kenya and why a fibre-optic line was created to link IEBC to NIS,” a statement from Raila's spokesman Dennis Onyango said.

He also cited the existence of what he termed unofficial polling stations like Kenyatta University and the IEBC’s silence on the matter two years on. Also cited by Raila was the collapse of the IT infrastructure during the election as well as alleged skewed issuance of identity and voter’s cards before it. “He expressed concern that the IEBC has largely succumbed to the Executive, which controls the dosage and quota on voter registration, while the electoral body seems unable to assert its mandate on continuous registration of voters,” the Cord statement said.

The meeting took place at the request of the IEBC as a follow-up to a similar one about two weeks ago that preceded the launch of the poll agency’s controversial Strategic Plan.

Hassan reportedly used the meeting to assure the opposition that the IEBC is determined to address all their concerns before the next election. He explained the roadmap to the launch of the Strategic Plan and IEBC’s intention to use its own post-election evaluation report to inform how it approaches the next election.