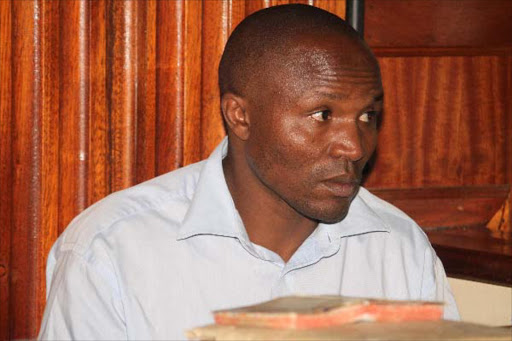 Self-confessed serial killer Philip Onyancha drugged a nine-year-old boy and left him to die in a thicket in Lenana after receiving a Sh4,000 ransom, a court heard yesterday.

Investigating officer Mureithi Murere recounted how Onyancha and his co-accused admitted to overdosing boy with drugs that left him unconscious. The boy later dead.

Murere told High Court judge Nicholas Ombija that upon interrogation, Onyancha said he was not acting alone but with Douglas Makori and Tobias Arad, who have been charged with the murder.

The boy was allegedly held at Arad’s house in Kawangware and was later ferried in Makori’s car.

“His body was then wrapped in a green towel and put in a sack and Makori’s vehicle was used to ferry it to a location close to where they had abducted him,” Murere said.

Onyancha lured the boy's father to send the ransom money by using his T-shirt, he said.

Murere said there was also a ransom letter left at the boy's home area.

He said this letter aided in Onyancha's

Murere said the letter had instructions on how the father would call a certain number and once he did, he would be given a different number where he would send the money.

The officer said the letter gave them the number that received the ransom, further linking it to Onyancha.

The letter made it easier for police to track down Onyancha after the money was transferred, Murere said.

Onyancha is on trial for the kidnap and murder.

The boy's decomposed body was found in a thicket in Lenana, Nairobi, on April 5, 2010.

Before he was arrested and charged with the murder of the boy and a woman in Karen, Onyancha confessed to having killed 17 people.

The confession video has since been played and admitted as an exhibit in the trial.

After his arrest, Onyancha confessed to other murders, including those of several prostitutes, and led police to the site where their remains were.