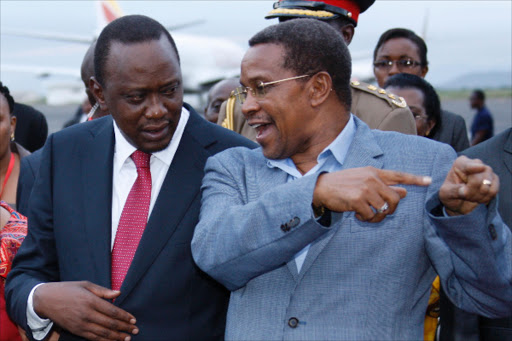 Tanzania had reduced flights by Kenya Airways to Dar es Salaam after Tanzanian tour vans were blocked from JKIA.

Presidents Uhuru Kenyatta (Kenya) and Jakaya Kikwete (Tanzania) met yesterday in Namibia and reached a deal to end the standoff.

A statement released by the Foreign Affairs ministry yesterday said the meeting was held in a cordial atmosphere.

"The two Heads of State emphasised the need to discuss openly issues affecting the brotherly and long-standing bilateral relationship that exists between Tanzania and Kenya," it said.

Both Presidents were in Windhoek to attend the inauguration of Namibia's third President Hage Geingob.

The event coincided with the 25th anniversary of the country's independence.

They agreed to reinstate the status quo.

This means that with immediate effect, Tanzania-registered vehicles will access the Jomo Kenyatta International Airport as before, while Kenya Airways will continue with its normal operations.

The leaders also agreed to have a meeting within four weeks "to discuss and reach a mutually beneficial agreement".