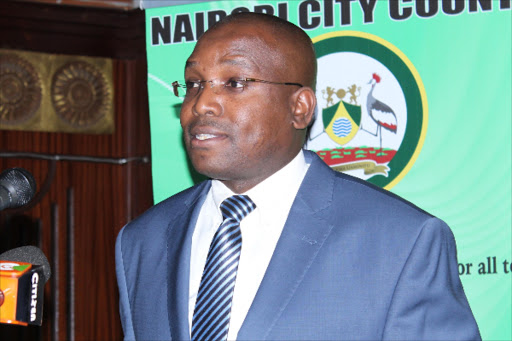 THE BLUEPRINT: Nairobi county Finance executive Gregory Mwakanongo during the public unveiling of the 2014-15 budget estimates at Charter Hall in Nairobi yesterday.

THERE was no Sh500 million deficit after a loan transfer from KCB to Equity Bank, Nairobi Finance executive Gregory Mwakanongo said yesterday.

Equity Bank general manger Robert Kiboti told the committee the bank only received Sh2.8 billion from KCB in the takeover.

However, Mwakanongo said Nairobi had spent Sh3.3 billion to transfer the loan.

He told the Star that in April last year, the county opened negotiations with KCB.

City Hall wanted KCB to buy off the loan since Equity Bank was charging fluctuating interest.

The now-defunct City Council of Nairobi took a Sh5 billion from Equity, which was later inherited by the county government.

Mwakanongo showed the Star the swift code where the loan was finally bought off on August 29 last year by KCB and Sh3,016,226,741 wired to Equity Bank.

In a letter sent to City Hall, Kiboti and the bank’s general manager for legal services John Njenga said:

“We hereby confirm that the loan account has been fully redeemed and closed,” they said.

“In consideration of the same, we hereby release you from the financial undertaking to us.”

A senior county official told the Star on condition of anonymity that Equity Bank is “lying” that they only received Sh2.8 billion from KCB.

“Equity managers have vowed not to comment on the matt

Post a comment
WATCH: The latest videos from the Star
by CHRISPINUS WEKESA
News
10 March 2015 - 07:00
Read The E-Paper