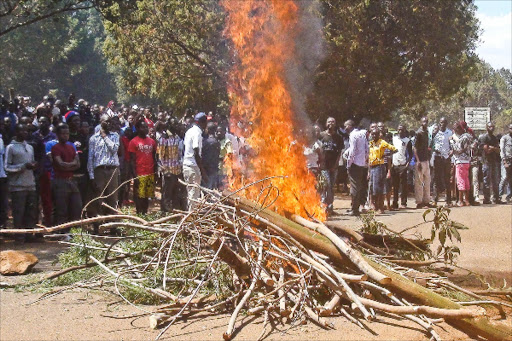 A third-year student at Moi University has been raped and killed at the institution, causing riots by angry students protesting over insecurity.

The student, Charity Maina, was strangled by her attackers, who also tore off her clothes.

The body was found near a matatu terminus located next to the gate of the main campus.

Rioting students burned down a police Land Rover that had gone to collect the body, which had been detained by students.

The students had refused to release the body, which they wanted to transport to the morgue using a college bus.

Hundreds of anti-riot police were deployed on the campus amid tension as angry students threatened to carry out more protests.

“We have been asking the police to provide adequate security for us but nothing has been done. We have had many incidents of insecurity yet police do not act,” said student leader Rolex Riziki.

The murdered student, who was in the School of Arts, was said to have been attacked on her way from the university to her hostel, located near the college gate.

The incident happened late on Saturday night. She had been studying with other students within the university before she left for her hostel.

None of the university senior managers had anything to say about the killing or the riots.

Uasin Gishu police commander Nyagah Muchungu declined to divulge any information on the incident as investigations had just commenced.

Riziki said they had raised issues to do with security with the university administration, which had promised to act, but students were still exposed to threats of insecurity.

“It’s not the first time students are being attacked here at the university and we squarely blame the police for failing to secure the university, leading to attacks from gangsters operating in this region,” said Riziki.

Student leaders said they suspect their colleague was attacked by outsiders near the matatu terminus. The body had been placed in the police Land Rover before it was transferred to an ambulance to take it to the mortuary at the Moi Referral Hospital.

Angry students then set ablaze the Land Rover, forcing police to use tear gas to disperse them.

Uasin Gishu county Commissioner Abdi Hassan said security would be beefed up at the university.

Police managed to restore calm at the institution only after the body was moved to the morgue.