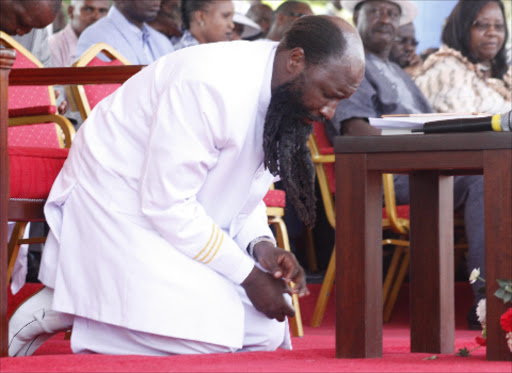 Prophet David Owour kneels in prayer during a peace crusade at the Uhuru park yesterday.Photo/HEZRON NJOROGE

He was charged before Nakuru senior principal magistrate James Mwaniki.

Kasera is accused of hacking into the church’s Yahoo mail, taking control of it and disrupting the church’s communication with partners.

The court heard that between December 1 and December 22, at an unknown location, Kasera unlawfully accessed [email protected] account.

This allegedly enabled Kasera to illegally access communications between the church and its partners and respond to the emails against the church’s will.

Dr Owuor’s second in command senior archbishop Dr Paul Onjoro is listed as the star witness in the case.

Onjoro and was directed to attend court on March 3 when the hearing starts.