87% of Kenyans against abortion - study 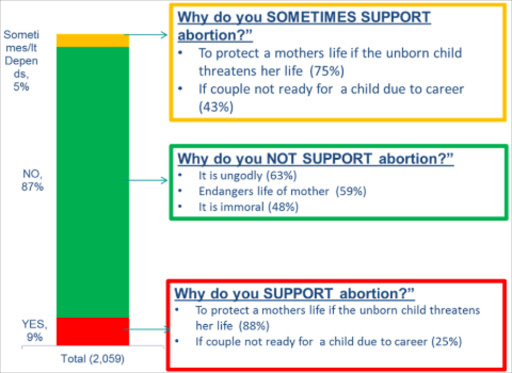 Majority of Kenyans do not support abortion a poll by research firm Ipsos Synovate says.

Majority of Kenyans do not support abortion a poll by research firm Ipsos Synovate says.

According to the study ‘Perceptions towards Abortion and Homosexuality in Kenya’, 87 per cent of those surveyed said they do not support abortion on demand. The main reasons for non-support for abortion are on moral (88 per cent) and religious grounds (48 per cent).

In addition there are concerns about the health risks that an abortion would pose to the mother.

However those surveyed were aware of the common places that an abortion can be procured. According to the study, the myth has been that abortion is procured by quack doctors in the backstreet but the responses show that the most common places are private clinics,64 per cent while 42 per cent mentioned homes.

Nine per cent of respondents said they support abortion with five per cent stating that it is tolerable when the life of the mother is in danger as provided for by Article 26 of the constitution.

In addition one in every five respondents (17 per cent) stated that they know someone in their neighbourhood /community who has procured an abortion and 13 per cent stated knowing where abortion is procured in their locality.

The law provides that an abortion is not permitted unless, in the opinion of a trained health professional, there is need for emergency treatment or the life or health, of the mother is in danger. Central had the highest number for acceptance of abortion on demand according to the study with 14 per cent followed by North Eastern with 12 per cent, and Nairobi with 11 per cent. Support in Nyanza, Western and Eastern was five per cent in the three regions, eight per cent in Western and five per cent in Rift Valley.

The proportion of those stating ‘sometimes’ is highest in Nairobi nine per cent, Western nine per cent and Central five per cent. Support of abortion was highest in urban areas at 10 percent and amongst on those aged between 18 to 24 years with 11 per cent.