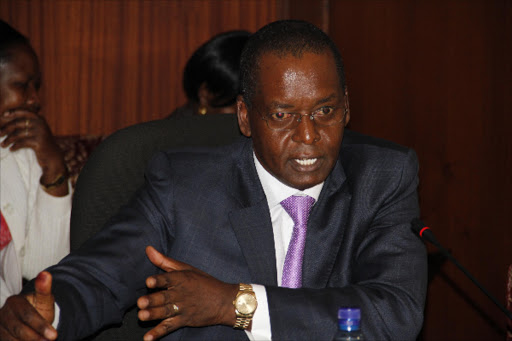 ABUSE OF OFFICE? Kimunya appears before the PIC over the SGR tender on February 17.

THE Director of Public Prosecution Keriako Tobiko has ordered the prosecution of former Cabinet minister Amos Kimunya over alleged abuse of office and fraudulent disposal and acquisition of public property.

The DPP issued the orders yesterday following an investigation and recommendation by the Ethics and Anti-Corruption Commission. Former Director of Land Adjudication Lilian Njenga and the board chairman of Midlands Ltd Junghae Wainaina are likely to be charged with Kimunya.

The charges are in connection with a 25 acre piece of public land in Njambini, Nyandarua county that was part of a 75-acre plot reserved by the Agriculture ministry for a potato seed multiplication project.

Kimunya, while Lands minister during President Mwai Kibaki’s government, caused part of the land to be allocated to Midlands, a company in which he was a director and shareholder, without the consent of the Agriculture ministry.

“The DPP is satisfied that there is sufficient evidence and that it is in the public interest to prosecute the said persons,” said the DPP in a statement yesterday. The DPP however emphasised that the suspects are presumed innocent and are entitled to a fair trial.

Kimunya held various ministerial posts during the 10 years of Kibaki presidency. He started as Land minister before moving to Finance, Trade and finally Transport. During this period, Kimunya jumped from one controversy to another but always emerged unscathed.

Kimunya was defeated by his former ally Samuel Gichigi in the March 2013 elections after which he retired to a quiet private life. Last month, Kimunya was forced to cut short his appearance before the Public Investments Committee after was declared a hostile witness while testifying on the standard gauge railway project.

In April 2007, Parliament questioned how Midland got the Njambini land. Kimunya explained that he stepped down as a director of Midland in 2006 due to his position as a minister in Kibaki's Government.

In 2008, Parliament passed a vote of no confidence against Kimunya while he was serving as Finance minister over the sale of the Grand Regency Hotel, now Laico Regency.

Kibaki later reinstated him but transferred him to Trade. Kimunya then criticized the Parliamentary Finance committee over the Grand Regency report, accusing the MPs of focusing on his character instead of proving that there was corruption.

As Finance minister, Kimunya was involved in controversies over the Safaricom privatisation and the De la Rue currency printing contract. In 2010, MPs accused Kimunya, while Transport minister, of making appointments from one community only at the Kenya Ports Authority.

In August 2012 Kimunya became entangled in the cancellation of a Sh55 billion tender for the construction of a new terminal at the JKIA. The Public Procurement and Oversight Authority later declared Kimunya’s actions regarding the airport tender illegal. The PPOA also reinstated the Chinese firm that was originally awarded the tender.