The single shot by Prof Edagwa's team will be a game-changer for people with the disease, affecting about one million Kenyans

• Medicines for hepatitis B are pills taken daily. They do not cure the infection but help sick people live well with it and be less likely to get liver disease or liver cancer.

• Turkana has the highest hepatitis B infection at 16.8 percent followed by Baringo (11.9) and Migori with a prevalence of 10 per cent. 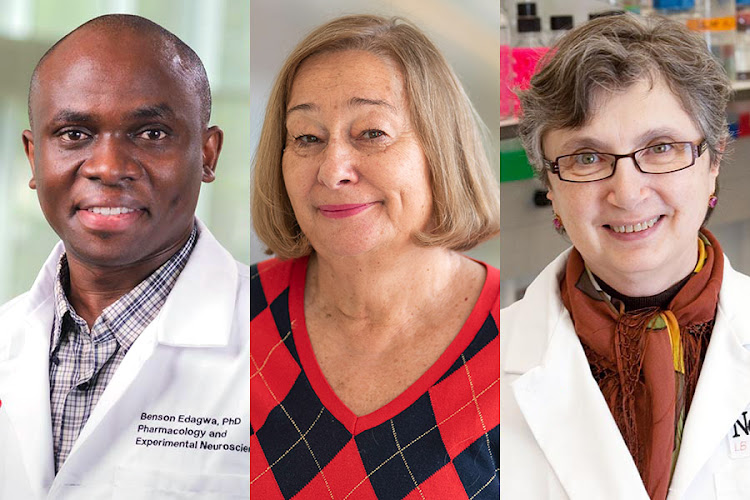 The study authors Benson Edagwa, Natalia Osna, and Larisa Poluektova, all from the University of Nebraska Medical Centre.
Image: UNMC

Trail-blazing Kenyan scientist Prof Benson Edagwa has developed a medication, taken once every four months, to treat chronic Hepatitis B.

Existing chronic hepatitis B drugs must be taken daily for a year or longer or they will not work, however they are not a cure.They may prevent cirrhosis or liver cancer

Edagwa and his team chemically modified Tenofovir, one of the existing daily pills, into an injection that is given once but remains active in the body for four months.

The new formulation may be a game-changer for people with the disease which affects about one million Kenyans, according to the Ministry of Health.

Edagwa, a Moi University chemistry graduate, is best known in Kenya for helping formulate a once-a-year ARV injection in 2020.

The Vihiga-born drug hunter and his team at the University of Nebraska Medical Centre (UNMC) have published details of the new Hepatitis B treatment in the December issue of Science Advances journal.

They tested it on mice carrying human liver cells to support natural infection as it occurs in humans, the UNMC said in a statement.

The animals were infected with chronic Hepatitis B and injected with the reformulated drug.

“We followed the infected animals for at least three months after a single treatment, and during that time, our therapy, called NM1TFV, outperformed the existing standard of care when administered as an injectable,” Edagwa said.

He hopes to take the drug to clinical trial within the next year or so, UNMC said.

Medicines for hepatitis B do not cure the infection but help sick people live well with it and be less likely to get liver cancer.

The pills are taken daily for a year or longer.

“That can be complicated by forgetfulness, pill fatigue and stigmas around some of these diseases,” said Howard Gendelman, chair of the UNMC Department of Pharmacology and Experimental Neuroscience and one of the study authors.

“A single long-acting shot is going to be a game changer.”

The study provides “clear proof of concept” toward a new therapeutic paradigm for the treatment and prevention of HBV infection, the authors say in the paper.

The study also explored the potential mechanisms by which a single shot of the chemically modified tenofovir formulation, called NM1TFV, controls HBV replication for four months in chronically-infected mouse models.

“We also found the medicine to be well tolerated, and the unique chemical composition of the modified drug contributed to its extended duration of action and robust effectiveness,” said Srijanee Das, lead co-author and graduate student in the department.

Edagwa said the drug has been licensed by UNeMed to Exavir Therapeutics Inc, a spin off company from his laboratory and that of Dr Gendelman.

Hepatitis is an viral inflammation of the liver.

Hepatitis B can cause chronic infection and puts people at high risk of death from cirrhosis and liver cancer.

Type 2 acquired hepatitis can also be caused by excessive drinking of alcohol.

The burden of hepatitis B infection is highest in the WHO Western Pacific Region and the WHO African Region, where 116 million and 81 million people are chronically infected, World Health Organization says.

It is most commonly spread from mother to child at birth.

Hepatitis B is also spread by needlestick injury, tattooing, piercing and exposure to infected blood and body fluids, such as saliva and menstrual, vaginal and seminal fluids.

Kenya’s Ministry of Health says traditional cuts and markings on the body are the main drivers of the high prevalence of Hepatitis B in three counties with the highest prevalence.

“We have circumcision which is a rite of passage that is practiced in these counties and of course when they are practiced some of them may use unsterilised equipment,” Dr Jebet Boit from National Aids and STIs Control Programme said.

“There are several factors including the procedures that are invasive and other practices but more studies need to be done around there to establish exact reasons," Dr Simon Kibias from the Ministry of Health said.

"But we need to be aware because the more we create awareness the more we get to know some of those contributing factors.”

Kibias is the head of the Directorate of Health Standards, Quality Assurance and Regulation.

The Kenya Population-based HIV Impact Assessment 2018 estimated the prevalence of Hepatitis B at three per cent in the general population and 4.7 per cent among the people living with HIV.

There are five main types of the hepatitis virus – A, B, C, D and E. However, the first three are the most prevalent in Kenya.

Hepatitis B and C lead to chronic disease in hundreds of millions of people globally and together are the most common cause of liver cirrhosis, liver cancer and viral hepatitis-related deaths.

WHO notes that to achieve hepatitis elimination at least 60 percent of people living with hepatitis B and C must be diagnosed and at least 50 per cent eligible for treatment must be cured or receiving treatment by 2025.

Post a comment
WATCH: The latest videos from the Star
by JOHN MUCHANGI Science Editor
Health
08 January 2023 - 23:00
Read The E-Paper