Trachoma is the leading infectious cause of blindness around the globe.

• Drug administration will be conducted for five days with a target estimated at 1,324,392 beneficiaries. 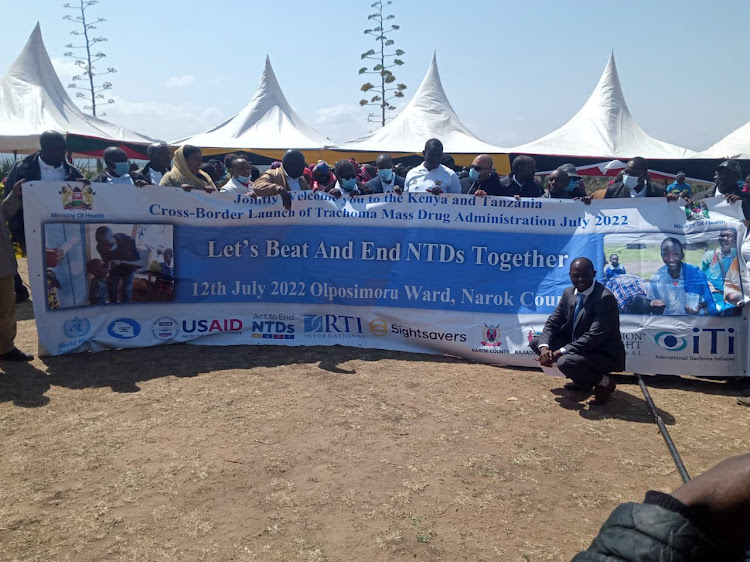 Officials at the launch of mass drug administration in Narok County on July 12.
Image: PSCU

Kenyan and Tanzanian governments have launched a mass drug administration exercise across their borders.

The joint launch which took place at Olposimoru center on Tuesday Narok West sub county on Tuesday is a collaboration between ministries of health targeting cross border pastoral communities.

Omondi said synchronizing drug administration across the two countries will prove to be the most effective way to completely deal with trachoma.

He added other measures such as hygiene and environmental cleanliness will help in dealing with the problem.

"The Govt is going out of its way to provide medication to community members & I urge them to take the medication," he said.

Kambona added drug administration will be conducted for five days with a target estimated at 1,324,392 beneficiaries.

"This will be across four counties of Narok and Kajiado in Kenya and Longido and Ngorongoro in Tanzania," he said.

Kambona said about 228,360 people are expected to be treated in Ngorongoro, with 161,367 targeted in Longido.

In Kenya, trachoma is endemic in five regions of West Pokot, Turkana, Baringo, Kajiado and Narok counties with more than 53,200 Kenyans already blind.

Trachoma is listed by the World Health Organization (WHO) as one of the 20 NTDs and is the leading infectious cause of blindness across the globe.

Pledges to improve road networks to open up the area for massive economic takeoff.
News
4 months ago

In a video posted by the Survival International group, fired shots can be heard as the natives flee.
News
5 months ago
Post a comment
WATCH: The latest videos from the Star
by BERTHA OCHOMO
Health
12 July 2022 - 16:45
Read The E-Paper