Now there are four public hospitals with radiotherapy machines, Nakuru Level Five Hospital being the latest

•In March, the ministry also revealed Kenya had ordered a CyberKnife, a highly sophisticated machine to aid in the treatment of cancer. 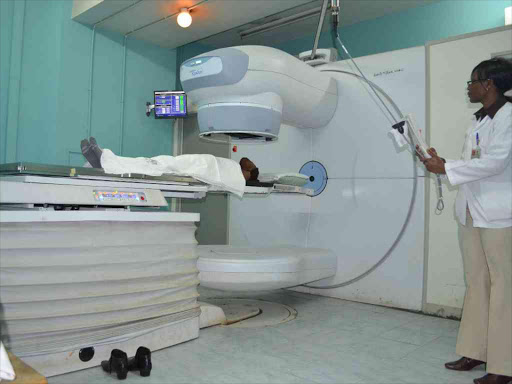 TREATMENT: Nakuru is now the fourth public hospital to get a radiotherapy machine.
Image: FILE

There are now four public hospitals offering radiotherapy services in Kenya, compared to one hospital when the current government took power in 2013.

At that time, only Kenya National Hospital (KNH) had radiology machines for the treatment of cancer.

But now there are four public hospitals with such machines, Nakuru Level Five Hospital being the latest.

The Sh600 million facility was largely financed by the national government, with contributions from the county.

“This is in line with Universal Health Coverage that aims to ensure all health services are affordable to all Kenyans and reduce unnecessary pain and suffering,” said Health PS Susan Mochache when she launched the facility in Nakuru on June 10.

The increased access to cancer treatment and dialysis services will remain one of President Uhuru Kenyatta’s biggest achievements in health when he leaves office this year.

Dialysis is currently offered in select public hospitals in all 47 counties, up from one hospital (KNH) when he assumed office in 2013.

This is largely because of the Managed Equipment Services for public facilities.

“To ease this burden, the Ministry of Health designed a national cancer control strategy to guide the country in putting in place specific interventions towards cancer prevention and control based on the existing risk factors and available resources,” Mochache said in Nakuru.

During the launch, the county government said up to 80 cancer patients will be able to receive treatment per day.

These centres currently provide chemotherapy and surgical services for cancer patients across the country.

“In fact, in 2021, nearly 40 per cent of all our cancer patients received cancer services at the regional centres close to their homes while decongesting our national referral facilities,” Mochache said.

She said cancer is estimated to be the third leading cause of death in Kenya with 37,000 new cases and 28,000 deaths annually.

In March, the ministry also revealed Kenya had ordered a CyberKnife, a highly sophisticated machine to aid in the treatment of cancer.

The machine, which is to arrive in three months, uses advanced technologies to track tumours anywhere in the body.

It will be stationed at KUTRRH.

The technology conducts non-invasive treatment for cancerous and non-cancerous tumours and other conditions where radiation therapy is indicated.

The machine is estimated to cost between $3 million to $5 million (Sh345 million to Sh500 million).

Its unique robotic design keeps the radiation on target even while the tumour moves. It can be used as an alternative to surgery or for patients who have inoperable or surgically complex tumours.

CyberKnife is used in the treatment of various types of cancers including brain tumours, head and neck cancer, lung, breast, spinal, liver, pancreas and prostate cancers.

The machine verifies the exact tumour position then adjusts the robot to precisely target it.

If this happens, Kenya will be the second country to own the machine in Africa after Egypt.

KU hospital chairperson Prof Olive Mugenda told the Star that the machine is also used for radiotherapy but is very specialised and will be able to get to some organs, which are unreachable with the other machines.

“It is a machine that can turn 360 degrees and get to the corners that other machines cannot,” she said.

The KUTRRH boasts of two PET/CTs at its dedicated cancer centre for chemotherapy and radiotherapy.

Mugenda said they have not encountered any major challenges with the PET machines except for normal maintenance.

“Generally we are doing okay, the patients are happy. Of course machines are machines they will break down occasionally so we get people to repair,” Mugenda said.