The county is experiencing a prolonged drought, following the failure of two rainy seasons

•Goats with visible ribcages roam the grounds of the health centre, searching for something to eat. The morning sun beats down on the sandy ground, drying it out even more.

•In Garissa, Unicef is supporting the County Government, health centres and communities to prepare for and respond to drought. 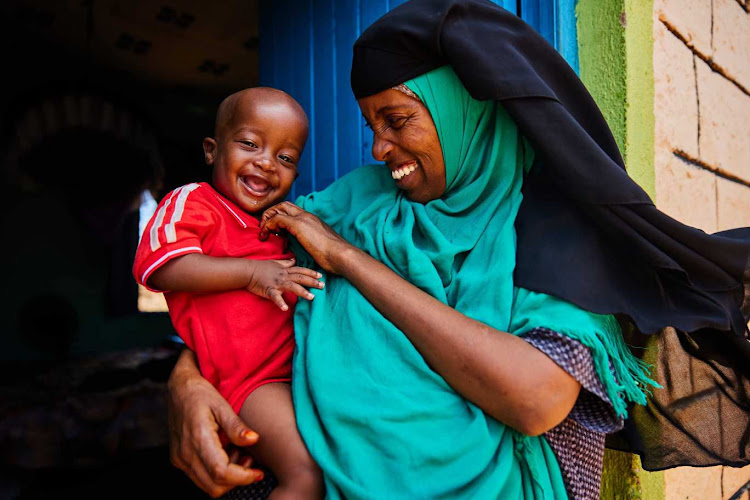 Kaha plays with her son Sudeys, 1, who is recovering from malnutrition.
Image: Unicef Kenya/Lameck Orina

It is a brutally hot, dry, and dusty day in Garissa town, when Kaha Hassan brings her one-year-old son Sudeys to Medina Health Centre.

Two consecutive rains have failed in the region and only a few scrubby bushes and skinny animals have survived. Goats with visible ribcages roam the grounds of the health centre, searching for something to eat. The morning sun beats down on the sandy ground, drying it out even more.

Kaha Hassan waits on a bench with six other mothers and young children. When her turn comes, she presents Sudeys to a health worker, who measures his weight and height.

Sudeys is calm on the scales but when he has to lie down on the measuring board, he bursts into tears and clings on to his mother afterwards. The health worker writes down his measurements with satisfaction.

She informs Kaha that Sudeys is improving but still severely malnourished and gives her some ready-to-use therapeutic food (RUTF) to continue his treatment at home.

Kaha and her family were forced to leave their home in Modogashe, where they used to herd animals, due to the drought. “We lost eight of cattle to drought and four goats,” Kaha says in Somali. “We had no pasture, no milk and no water. We couldn’t pay rent anymore.”

Leaving their remaining animals with a relative, the family moved to Garissa town to live with Kaha’s mother in law. But then things got even worse.

“Sudeys became weak because I had no milk or food to give him,” Kaha recalls. “At first, I thought he was sick, but he did not recover. When the community health volunteer visited us, he was not moving. He measured my son’s arm and found he had severe acute malnutrition. He told me to take him to the health centre. As a mother, I was very worried because I didn’t have anything to give him.”

Garissa County is experiencing a prolonged drought, following the failure of two rainy seasons. As an arid and semi-arid land (ASAL) county, droughts in Garissa exacerbate already difficult conditions. Coming on top of the economic impact of the COVID-19 pandemic, the drought has pushed many families over the edge into poverty.

“In Garissa County, the drought has impacted us so much that we are in crisis,” County Nutrition Coordinator Shamat Yusuf says.

“The water pans have all dried up, so the drought is real. Many people are migrating from their previous villages to the town and so many children have been affected. For every 100 children, 17 are acutely malnourished. If it doesn’t rain soon, this is going to worsen.” 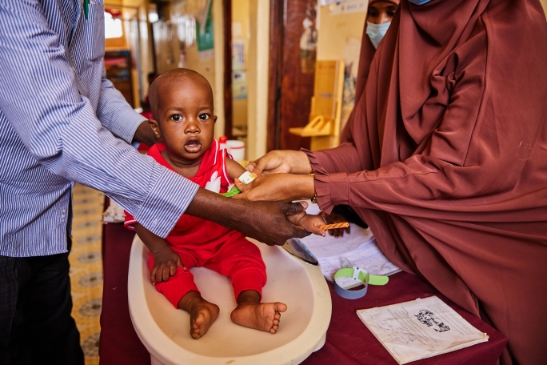 In Garissa, Unicef is supporting the County Government, health centres and communities to prepare for and respond to drought.

This includes support for health centres with nutrition supplies such as ready-to-use therapeutic food (RUTF), training on integrated management of malnutrition (IMAM), and support for communities with mid-upper arm circumference (MUAC) measurement.

“Young children are the most vulnerable to malnutrition,” UNICEF Nutrition Officer Nicholas Kirimi explains. “We have a tape we use to measure the mid-upper arm circumference of children under five. This helps us identify cases of children who are severely or moderately acutely malnourished, as well as children who are growing healthily.”

“IMAM acts as a surveillance tool for the health facility and community to know whenever there is an increase or decrease in malnutrition caseloads,” he continues. “Medina Health Centre is now at alarm level. When this happens, they open their malnutrition services daily.”

Back at home, Kaha sits on a mattress in the one-room house the family is sharing. Their few possessions are packed into a single suitcase and chest of drawers. Kaha opens a new packet of RUTF and feeds three quarters of it to Sudeys, while his older brother, two-year-old Khalid, looks on.

Thanks to the help from UNICEF and Medina Health Centre, Sudeys is well on his way to recovery. His behaviour has also begun to return to normal. “I feel happy when I go to the health centre because they are supporting us,” Kaha says. “Sudeys is doing much better now and is even trying to stand. When the drought ends, I hope to go back home and continue to raise my family.”

Post a comment
WATCH: The latest videos from the Star
by ANDREW BROWN
Health
12 December 2021 - 17:51
Read The E-Paper