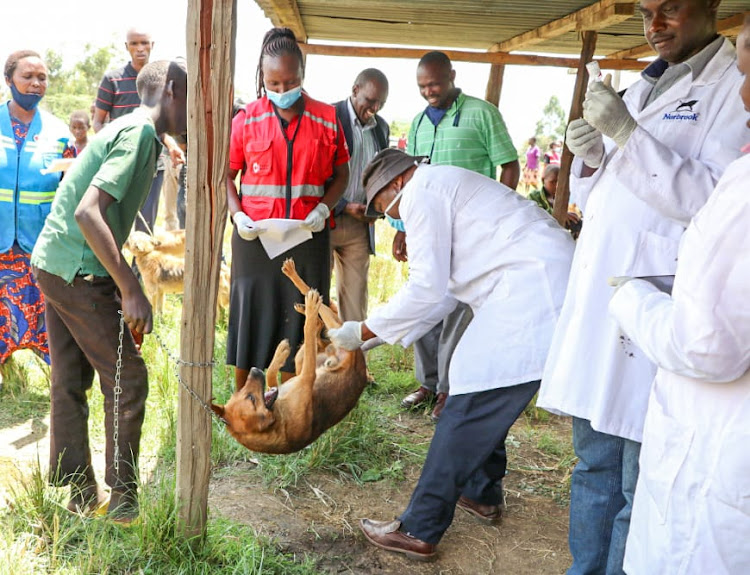 This follows a recent outbreak of rabies within the Sub-County where donkey owners reported a case of ‘wild’ donkey at Stage 26.

The aim of the campaign is to create awareness on the impact of Rabies to communities and reduce cases of human and animal Rabies through vaccination the dog and donkey population.

During the exercise over 500 donkeys and 3,000 dogs were vaccinated against rabies over the weekend following an outbreak of the disease in the area.

According to  Samantha Opere, KENDAT, project manager, the exercise was necessitated by an incident two weeks ago where a rabid donkey bit and infected a number of donkeys and people at stage 26.

She said reports indicated that the donkey had earlier on been bitten by a rabid infected dog in the month of April and had spread the disease to six more donkeys in the area.

“Two weeks ago, a rogue donkey bit its owner and several other donkeys. We visited the farm with a team of veterinary officers and established that it had rabies and we had no other option but to have it killed,''

Kamulu, Ruai and Utawala are among the estates that have a high donkey population, which the community relies on for domestic services like fetching water and transporting construction materials.

Donkey owners in the area led by Ruth Wanjira, Dorothy Kathambi and Jotham Kimani welcomed the vaccination exercise, terming it a relief to them.

“Once reports of a donkey that had been infected with rabies surfaced, we were afraid for our animals. The vaccination is welcome, however, there are some farmers who are yet to bring their animals for vaccination and might deter efforts to weed the disease out of this area,” said Jotham Kimani.

The Chairman of Nairobi County Donkey Owners’ Association Stephen Kamuiru Muthamia called on donkey owners to join groups where their welfare can easily be addressed.

Cases of donkey vaccination against rabies are rare with the last one being done three years ago.

Patrick Mutua, the owner of the rabid donkey has not only lost his only source of livelihood but has to cater for his own Rabies post exposure prophylaxis. The cost of which has further put a dent in their income.

The Rabies virus attacks the brain, once symptoms appear, it is 100 per cent fatal. Symptoms include fever, headache, excess salivation, muscle spasms, paralysis and mental confusion.

“Dog owners should be responsible for the care of their animals. They need to ensure that their dogs are well fed and are vaccinated in a timely manner. It is cheaper to prevent Rabies by vaccinating dogs than treating human Rabies” Dr Opere.

Once bitten by a rabid animal, thoroughly wash the wound with soap and water

Seek medical care, which will entail post exposure prophylaxis rabies vaccination and management of the wound

Rabies is a preventable viral disease of warm-blooded animals, which is usually spread through the bite of a rabid animal or contact with its saliva. Dogs are the main source of human rabies.

Data from the World Health Organization estimates that one person dies from human rabies every nine minutes. It further states that 40 per cent of the rabies victims are children under the age of 15 years.

Poor rural communities are most affected by rabies because their dogs are left to roam freely in search of food.

These dogs rarely receive veterinary care as such they are not likely to be vaccinated in a timely manner.