•The data, summarized in the UN Women report 'From Insights to Action: Gender Equality', also show that the pandemic will push 96 million people into extreme poverty by 2021, 47 million of whom are women and girls.

•KNBS in May said that 50 per cent of working women had been rendered jobless by the pandemic-driven lockdown. 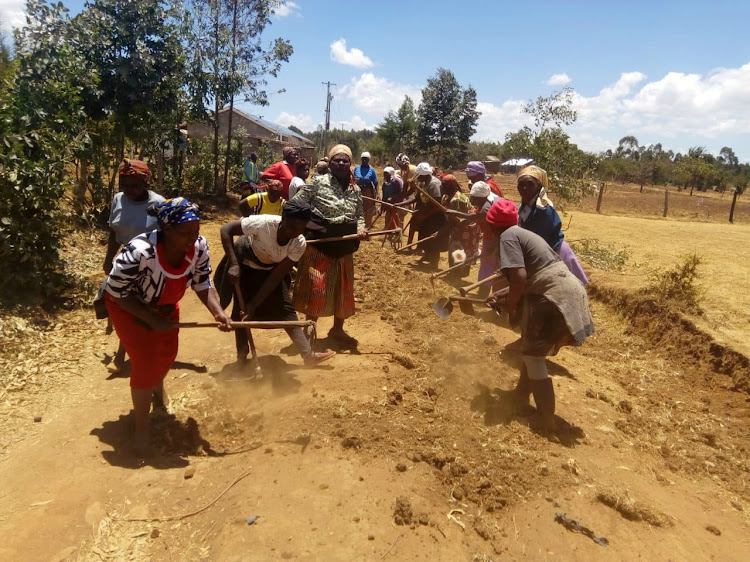 Women in a communal activity. They are most affected by the Covid-19 lockdown.
Image: FILE

The ongoing Covid-19 crisis will dramatically increase the poverty rate for women and widen the gap between men and women who live in poverty, according to new data released by UN Women and the United Nations Development Programme.

The poverty rate for women was expected to decrease by 2.7 per cent between 2019 and 2021 globally, but projections now point to an increase of 9.1 per cent due to the pandemic and its fallout.

Kenyan women are among the hardest hit.

A survey on Socio Economic Impact of Covid-19 on Households Report by the Kenya National Bureau of Statistics (KNBS) in May showed that 50 per cent of working women had been rendered jobless by the pandemic-driven lockdown.

The new projections show that while the pandemic will impact global poverty generally, women will continue to be disproportionately affected, especially women of reproductive age.

It was commissioned by UN Women and UNDP, and carried out by the Pardee Centre for International Futures at the University of Denver.

“The increases in women’s extreme poverty, in particular at these two stages of their lives, are a stark indictment of deep flaws in the ways we have constructed our societies and economies,” said UN Women Executive Director Phumzile Mlambo-Ngcuka.

“We know that women take most of the responsibility for caring for the family; they earn less, save less and hold much less secure jobs – in fact, overall, women’s employment is 19 per cent more at risk than men’s,"  Mlambo-Ngcuka said in a statement.

The data, summarized in the UN Women report From Insights to Action: Gender Equality in the wake of Covid-19, also show that the pandemic will push 96 million people into extreme poverty by 2021, 47 million of whom are women and girls.

“Women are bearing the brunt of the Covid-19 crisis as they are more likely to lose their source of income and less likely to be covered by social protection measures,”said Achim Steiner, UNDP Administrator.

“More than 100 million women and girls could be lifted out of poverty if governments implement a comprehensive strategy aimed at improving access to education and family planning, fair and equal wages, and expanding social transfers,” he added.

In Kenya, the KNBS survey, released by Treasury CS Ukur Yatani in May, said women are more affected because more women than men work in jobs that are vulnerable to disruption, especially in the service and manufacturing industries.

Half of those who were absent from work said that it was due to lockout or stay away instructions as guided by the government and/or employers.