They were booked for surgery at the Laser Eye Centre in Sarit Centre, Westlands

•"If i do not receive treatment as a matter of urgency, i will likely lose my sight and go blind entirely," she says in the letter signed by 22 other patients. 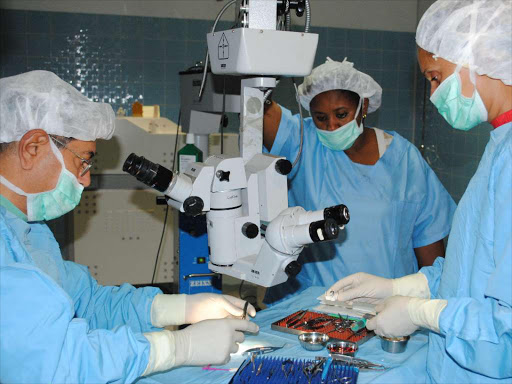 Patients who are queued for eye surgeries at the Laser Eye Centre in Nairobi have  asked President Uhuru Kenyatta to prevail on the Sarit Centre management to reopen the premises.

The patients were expected to undergo various sight-saving surgeries and crucial reviews before the landlord closed the clinic over a dispute.

One patient, identified as Penina Kathoni, says she risks losing sight permanently if she does not undergo surgery to seal blood vessels growing on her cornea.

"If I do not receive treatment as a matter of urgency, I will likely lose my sight and go blind entirely," she says in the letter signed by 22 other patients.

The clinic is run by Dr Joshi Mukesh, a leading Kenyan ophthalmologist who runs Africa’s only C-ten services, to reshape the cornea for short sighted people through a no-cut laser surgery.

The dispute came after a fire razed a section of the mall in May 2018, which necessitated repairs. Dr Joshi asked the renovators not to work during his working hours as it was disrupting his work.

Late last month, they locked the clinic on the mall's third floor, saying the lease had expired.

Chief operations officer of PBM Nominees, Nitin Shah, said they had given the clinic enough time.

Dr Joshi says he intends to move, but the Covid-19 lock-down made it impossible to bring specialist engineers from South Africa, Italy and the US to decommission and dismantle the medical equipment, safely transport and thereafter calibrate and test the equipment before commissioning them in the new premises.

He moved to court but on July 30, a day before the expiry of the lease, the Environment and Land Court ruled in favour of the landlord.

He is now banking on the Court of Appeal to allow their extension application, which would afford them more time to move the medical equipment.